Score the most points by finding words in the game grid.

Choose a person (the dealer) to draw the tiles for the first round. (Set the bonus rings aside for now - they're used in rounds 2 and 3).

The dealer draws 13 tiles from the container and arranges them, letter side up, to form a grid like the one below, then starts a 60-second timer.

You'll be racing against your opponents to find as many words as you can in the grid. All players play every turn, even the dealer.

All your words must be formed by making paths through the grid. You can start each word on any tile. Examples: WORD, DIG, RABID, WOE.

Your words can use the same letter tile more than once. Examples: DIGIT (uses I twice), TIARA (uses A twice). However, you can't hop on the same tile to use it twice in a row.

Example: RABBIT is not allowed, because you'd have to use the B twice without moving to a new tile.

Blank tiles can stand for any letter you want. They can even stand for different letters within a round to make many new words. Examples: WIG, WIN, WIT using the blank tile at the bottom left.

However, if you use a blank tile more than once in the same word, it has to stand for the same letter each time.

Example: ROSES is OK, but ROPES is not allowed, because the same blank would have to stand for P and S.

When the timer runs out, each player reads out their list of words. Any word that was found by more than one player gets crossed off everybody's lists. Only unique words count in this game!

If you don't know a word, you can challenge it by checking the dictionary. If it's not in there, cross it off! Once all players have finished reading their lists and crossing off words, each player scores 1 point for each word left on their list.


Rounds 2 and 3: Using the Bonus Rings

After each round, the person to the dealer's left becomes the new dealer. The dealer sets aside the tiles from the previous round and draws new tiles from the container to make a new grid.

Letters with rings double the value of any word that uses them. Every time a ringed letter is used, the value doubles again.

At the end of the third round, whoever has the most points wins the game! 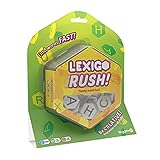