Be the first player to transform your caterpillar into a beautiful butterfly by collecting five (5) unique puzzle pieces and building a one-of-a-kind butterfly.

Moving Around the Board

Players do not need to land on a fruit space with an exact count. If a player crosses a fruit piece during his/her move, he/she Stops and Collects a Butterfly Puzzle Piece and the turn is over.

If a player crosses a fruit space that he/she has already landed on, he/she continues to move past the space and does not stop and collect an additional Butterfly Puzzle Piece.

If a player turns over a Movement Card with the caterpillar and junk food, he/she does not move and play passes to the left.

If a player turns over a Movement Card with the caterpillar and a leaf, he/she can move his/her playing piece to any fruit space he/she has not already landed on.

If the player has already landed on all of the fruit spaces and finished his/her Butterfly, he/she can move directly to the Butterfly in the center of the Game Board and the game is over.

The first player to build a Butterfly Puzzle and move his/her Caterpillar to the Butterfly space in the middle of the Game Board wins the game.

Note: You do not need to land on the Butterfly space with an exact count. 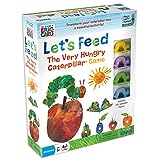