Be the first player to move your pawn from Start to finish by racing opponents - and the random timer - to say the last word.

All players shout out words that fit Subject and Letter Cards in each round. The last player to call out a correct item before the timer buzzes scores!

The first player to advance to the Finish space wins the game!

Letter Card appears, play changes for that round.

How to Play a Hot Potato Round:

Inevitably, one of your friends will try to pull a fast one and slip in a completely bogus word or play a Subject Card without already having an item in mind. It is the group's job to keep them in line.

Don't believe "Somewhere with Tall Buildings" is a valid U.S. city? Speak up! Any response can be challenged by the group and majority rules. If the bogus word was the Last Word, the last valid response wins the round.

There isn't any! If you knew how much time you had each round, you could try to wait until the last moment to blurt out words in hopes of winning. BUT the Last Word timer is unpredictable, so just keep blurting out words and hope for the best!

Sometimes a player will end up with a Subject Card that just isn't hitting the spot.

If someone is holding on to a card for a long time and can't come up with a word during a bunch of rounds, take pity on them and let them draw a new Subject Card. 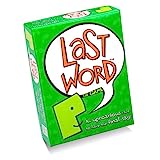 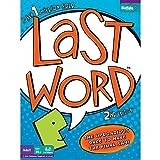