A fresh take on the classic Last Letter game! 61 clever illustrations allow for countless interpretations and a unique experience each time you play. A fast, fun game that will inspire creativity, laughter and quick thinking!

Be the first player to get rid of your cards.

Shuffle all of the cards and deal five cards face-down to each player. Place one card face-up in the center of the table to create the Discard Pile. The remaining cards can be put aside for future games. 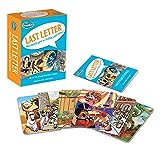