The Llama commands it: Get rid of all your negative points! Play your cards or you will earn negative points. If you can't play a card, you'll have to decide: Do you quit now, or do you draw a card which hopefully you can play later?

Negative points come in the form of tokens, and if you get rid of all your cards, you can return a token-which may be worth 1 or 10 points. The player with the fewest points at the end wins the game.

Shuffle all of the cards and deal six cards to each player. The remaining cards make up the face-down draw pile. Turn over the top card to start the discard pile. Get the tokens ready, then you're all set.

The game is played over several rounds. The youngest player goes first and takes one of these three actions for their turn:

Then, the player to their left takes a turn.

The top card on the discard pile determines which cards can be played. You can play a card with the same value as the top card or one with that value plus one.

Victor goes first and plays a 6. Next, it's Judy's turn. She plays a llama on top of the 6.

Draw 1 card from the draw pile. You can't play a card on the same turn, so the turn passes to the next player.

If the draw pile runs out, don't create a new one. From now on, you can't choose this action.

If you can't play a card or don't want to, and don't feel like drawing a card either, you can quit the current round. Place your cards in front of you, face down.

A little later, Henri can't play a card. He quits the round and places his three 5s face down in front of him.

The round ends immediately if:

If all but one player have quit the round, that player continues on his own. However, he may no longer draw cards.

Jacques, Victor, and Henri have quit for the round. Judy plays her 3 and her two 4s, but she cannot play her two 1s or the llama. This is the end of the round.

Now your remaining cards give you negative points-no matter if you have them in front of you or in your hand. Each card is worth its value in points. Llamas are worth 10 points.

However, you count each card value only once per round, so if you have two 4s, for example, you only get four points, and all of your llamas only give you 10 points.

The negative points you get come in the form of tokens. There are white 1-point tokens and black 10-point tokens, which you may swap freely at any time.

Judy's two 1s and her llama earn her 11 negative points.

If you have managed to play all of your cards and you have tokens from before, you may return one of them - either a 1-point or a 10-point token, your choice.

Judy has one 1-point and one 10-point token. In the next round, she manages to get rid of all her cards, so she returns a token.

Of course, she picks the 10-point token.

Shuffle all the cards back together again and deal six to each player for the next round. Start a new discard pile with the top card from the draw pile. The last player to play a card in the previous round starts off the new round.

Continue playing until one of you has collected 40 or more points. The player with the fewest points wins the game. If there is a tie, the players involved share the victory. 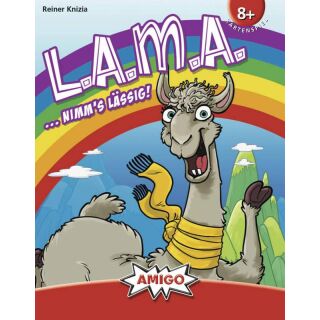