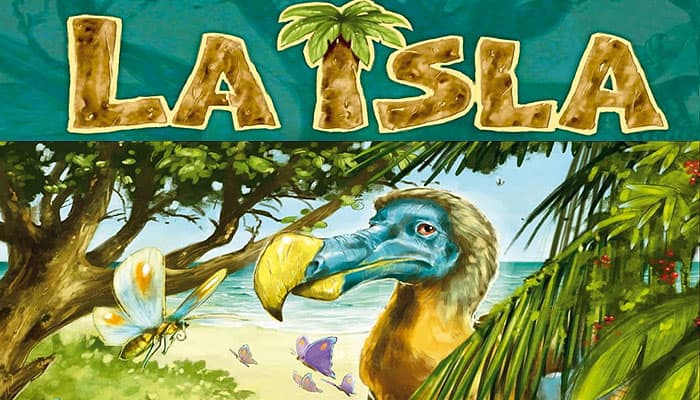 Explore the mysterious island of La Isla, and hunt for long- thought-extinct animals: the gentle Dodo, the vigilant Giant Fossa, the elusive Golden Toad, the dexterous Sardinian Pika and the graceful Owlet Moth.

Place your explorers onto various island spaces, encircling as many of the valuable animals as possible. Play your cards to perform special functions, receive key resources, and score victory points for animals you've collected. If you play your cards right, you can get the upper hand!

The player with the most victory points at the end of the game is the winner.

When playing the game for the first time, carefully remove all cardboard pieces from their frames. Fold and fasten the cardholders so that the game summaries A-D are visible at the bottom of their front sides.

Important: There is one extra tile for each type of animal (i.e. 5 extra small animal tiles). These are not needed during the game, and are included as replacements only!

Build the island in the middle of the table. Add the 10 "teeth" pieces in random order to the central connector, so that a ten-sided island, La Isla, results.

Take 7 of each small animal tile and randomly distribute them onto the 35 dark green jungle regions of the island. The numbers 2, 3, and 4 printed on the regions should remain visible (see figure).

Place the game board (with the victory point track and the five animal tracks) next to the island.

Place 1 purple marker onto the starting space at the bottom of each animal track.

With fewer than 4 players, return the unused game components (large animal tiles, cardholders, and explorers) to the game box.

Place the remaining resources next to the island as a general supply.

New players should play with the 1-value cards only, returning the 2-value cards to the game box. (After you have played the game a few times, use all 180 cards to make the game more interesting).

Shuffle all 120 (or 180) cards and place them face down in multiple draw piles next to the island.

Give the oldest player the starting player card.

The game is played in multiple rounds. Each round consists of a card phase followed by four action phases (A, B, C, and D).

At the end of a round, give the starting player card to the next player in clockwise order, and play a new round (starting with the card phase, followed by action phases A-D), etc., until the game is over.

In the card phase, all players draw 3 cards from the face down draw piles of their choice, and add the cards to their hands.

Each card has three possible uses:

Place these cards face down below your cardholder, such that exactly one card is assigned to each of the letters A, B, and D.

Once all players have assigned their cards, the action phases begin.

Players first carry out action A. When all players have finished action A, they continue to action B, followed by action C, and finally action D. Action phases A, B, and D can be carried out by all players simultaneously, but action phase C must be played in clockwise order, beginning with the current starting player.

Take the card you assigned to the letter A and add it face up to your cardholder, leaving only the top half of the card (i.e. its special function) visible. From this point on, you may continue to use this special function, even in subsequent rounds.

As long as you still have a free slot in your cardholder (i.e. during the first three rounds), you may fill an empty space with the card that you chose. Starting in the fourth round, you must choose a card in your cardholder to cover up, taking away your ability to use the covered-up card's function. Note: You may cover up cards in the same slot multiple times.

Note: You are never allowed to have the identical special function visible in more than one slot on your cardholder. Similar functions, however, are allowed, and are often very useful.

Take the card you assigned to the letter B and add it face up to a discard pile next to the draw piles. Then, take a resource from the general supply that matches the one indicated on the card, and add it to your own personal supply.

Note: The general supply of resources is not intended to be limited. Should it run out, use something else temporarily as a resource.

In clockwise order starting with the current starting player, place one of your explorers onto the island. Take an explorer from your personal supply to start; once your supply is exhausted (i.e. after the fifth round), choose one of your already-placed explorers and move it elsewhere on the island.

Place explorers onto the middle of the colored landscape spaces, such that the space's symbols (tent, hat, rope, bottle, and backpack) remain visible.

Placing an explorer costs two resources of the same color as the space you are placing the explorer onto.

Example: Anna places her explorer onto a desert space. She returns two yellow resources to the general supply.

Note: If you can't or don't want to place an explorer, you may instead take one resource, of your choice, from the general supply.

Once you have placed explorers onto all of the landscape spaces that surround a jungle region, you receive the animal tile from that space, as well as victory points. First, place the animal tile next to your cardholder so that it is easily visible.

It is possible to claim more than one animal tile at the same time by surrounding more than one jungle region when placing a single explorer.

Example: Paul places his explorer onto the grey mountain space. This lets him claim two animal tiles, the Owlet Moth and the Sardinian Pika, since he has surrounded two jungle regions with four explorers. He places the two animal tiles next to his cardholder and scores a total of 5 (2+3) victory points.

Take the card you assigned to the letter D and add it face up to the discard pile. Then, move the purple marker corresponding to the animal type on your card one space higher on the animal track. You (and only you!) immediately score 1 victory point for each animal of that type that you possess. Large animal tiles are worth 2 points.

Example: Lena plays a card showing a Dodo. She moves the purple marker on the Dodo track one space higher.

Since she has the large Dodo tile as well as one small Dodo tile, she scores a total of 3 victory points. All other players with Dodo tiles score nothing.

At the end of each round, add together the values of the areas of the five purple animal markers.

In addition to the victory points scored during the game, each player now receives additional points as follows:


The player with the most victory points is the winner. In the case of a tie, the winner is the tied player with more resources left over. If there is still a tie, there are multiple winners.

. shows a summary of actions A to D on the upper left, and a summary of final scoring on the bottom right. It also provides a detailed explanation of each of the special card functions.

All symbols, landscape spaces, resource colors, or animals indicated on the summary sheet are only examples of the types of special functions; the cards themselves show all of the possibilities.

The iconography is always the same; in most cases, players can claim an additional resource from the general supply, or gain victory points or the right to move a purple marker, etc.

.. typically either modify the standard game rules or improve the strength of an action. As soon as a special function is covered by another card, its effect is lost, with two exceptions: If you received a new explorer from the general supply, then you keep the explorer even after the corresponding card is covered.

Similarly, the effect of the card that gives you an additional card slot is not lost once that card's special function is covered.

You are allowed to combine the effects of multiple special function cards. The basic rule is that you may use these effects, but you are not forced to.

Example: Peter has these three cards showing in his cardholder. During action C, if he chooses to place an explorer on a green landscape space with a rope, he scores 3 + 3 = 6 victory points while also receiving a resource of his choice from the general supply.