You can use the 9 blank task cards to add your own topics! Just write them on the cards and shuffl e them with the others. If you don't want to play with them, just put them back into the box.

GARBUNA? What is that!? An Australian marsupial? A brand of candy bar? A very rare disease-or perhaps someone remarkably smart?

Nobody knows-and that is why this crazy word creation game is so much fun. Will you create the funniest words? And will you successfully guess the most words created by your fellow players?

The player with most points after six rounds wins the game.

Each player receives the following items in his or her chosen color:


Lay out the number cards in the center of the table:

Shuffle the Task Cards and put them in a face-down pile in the center of the table. Spread out all 64 letter tokens, face down and in easy reach of all players.

Place the supply of scoring chips next to them.

Each game consists of 6 rounds, and each round consists of 11 steps, as described below. Before you start, choose a starting player, for example the player with the most vowels in his or her first and last names.

Each round, the next player clockwise around the table is the starting player.

The game ends after 6 rounds. The player with the most points wins. If there is a tie, there are multiple winners. 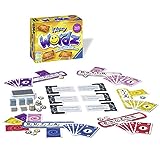