Place the Base in the center of the table. Separate and place the Polycubes, Scoring Tiles, and Balance Cubes off to the side of the play area.


After you've successfully placed a Polycube and a Balance Cube, take the Scoring Tile that corresponds to the Polycube.

The game consists of three rounds.

A round ends when:

If the tower s falls during your turn, you lose your points for that round. After three rounds have been played, the player with the highest total score wins the game.

The following games add another level of difficulty to the standard game of Kozo. Try one or a combination of both of these variants. 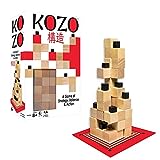