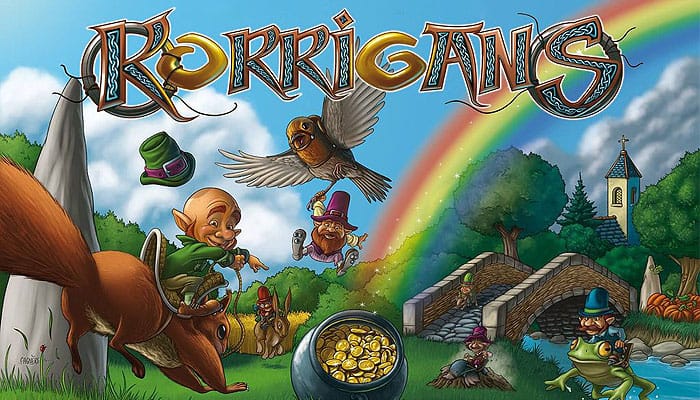 Make your Korrigan tribe richer than the others by picking four-leaf clovers giving Gold coins and/or by moving onto the field where the Cauldron of gold appears at the end of the game.

Place the board in the center of the table 1. For your first few games, use the side where Companions are visible.

Place a Menhir 3 in each field, except in the village in the board center.

Each player picks a color and takes the corresponding 2 Korrigans 4 and screen.

Place the Cauldron of gold 5, the Elf and Goblin tokens 6,, the Troll token 7, as well as the 5 Backup Companion tokens 8 next to the board.

The most bearded player (or the oldest) places the First player token 9 in front of him.

The first player places the 14 Rainbow pawns in the bag 10 and takes the bag next to him.

The first player places his first Korrigan in one of the two fields indicated by the number 1. He then secretly looks at all of the Clover tokens on that field, chooses one, and places it behind his screen. The leftover tokens should be placed face-down back in the field.

The player to his left then does the same in one of the fields indicated with the number 2, and so on until all players have placed their first Korrigans. Then all players should take a second (identical) turn using the other field indicated by their player number.

Advanced rule : If you play with the side of the board without the icons, you can place your Korrigans on the field of your choice, even one that is already occupied, with no restrictions. The other rules for placing Korrigans remain unchanged.

There are 2 types of Clover tokens: Companions and Gold coins.

Allow Korrigan to move in various ways (see Korrigans movement and Companions, on the back).

Gold Coins Tokens (value From 1 To 4)

Allow players to earn points at the end of the game.

Important: It is strongly advised that each player pick at least one Companion from the available tokens picked during the two turns of the Korrigan's arrival. Otherwise, the player will be forced to sacrifice one of his tokens to get a Backup Companion (see Backup Companions, on the back).

Each round proceeds as follows:

For the first turn, the first player has the bag and is the first to draw a Rainbow pawn.

Clarification: the First Player remains the same for the entire game. He is responsible for reminding the player with the bag to draw a Rainbow pawn from the bag when it is his turn.

Check the color of the pawn:

Each player, starting with the first, MUST move one of his Korrigans to another field using a Companion previously drawn.

Each Companion allows a specific movement:

The hare allows a Korrigan to move to an adjacent field if there is no door and no bridge.

The bird allows a Korrigan to move to a field that is the same color as the field he is leaving.

The squirrel allows a Korrigan to move through a door.

The mouse allows a Korrigan to cross a bridge.

In order to use a Companion's movement, the player has to possess the corresponding Clover token. The first time he uses it, he reveals the token by placing it in front of his screen. The token stays visible for the entire game and can be used during later turns.

The sacrificed token is removed from the game, without being shown to the other players. The Backup Companion token is placed in front of the the player's screen and can be used like the other Companion tokens.

It is placed (and used) as either a Hare OR a Squirrel and CANNOT be flipped during the game. The sacrifice is forbidden after the Cauldron appearance.

If a player takes the last Clover token of a field, he also takes the Menhir. The player flips the Menhir, shows it to the other players and immediately applies the effect corresponding to the engraved drawing, described below (see Menhirs). The Menhir is then placed back in the box, unless the Menhir gives Gold coins.

The player places an Elf token under his Korrigan. The elf gives him 2 Gold coins at the end of the game. If an opponent moves into the field where the Elf is, the Elf token goes immediately under that opponent's Korrigan.

Clarificationion on the Elf and the Goblin: The token moves together with your Korrigan. A Korrigan cannot have 2 tokens. If a Korrigan with a token acquires another token, the original token is removed from the game and replaced the new one.

The player removes another player' screen who will, from now on, show his Clover tokens to all the other players, until the end of the game.

The player places or replaces the Troll token between two fields (on a free path, on a bridge or on a door). Korrigans cannot go through the path blocked by the Troll.

The player can immediately execute a second movement and therefore pick another Clover token. This movement can be executed by the second Korrigan.

The player keeps the Menhir as a bonus until the end of the game.

When the 7th rainbow color is drawn, the Cauldron appears.

The player drawing the 7th color immediately places the Cauldron of gold on the board following these conditions:

The turn following the Cauldron appearance is different than the rest of the game:

In turn, each player tries to move both of their Korrigans into the field where the Cauldron appeared.

Example : The seventh color appeared while row 3 and columns 5 and 6 have no rainbow pawn. The Cauldron can be placed on three fields.

During his turn, a player:

Example: In order to execute 2 Hare movements, the player has to discard 2 Hare tokens.

The player with the most Gold is the winner.

In case of a tie, the player with the most Companions remaining wins the game. If it is still tied, the player who is latest in turn order wins.