Kobayakawa is a game of bluffing and deduction, and the player that ends up with the highest numbered card wins the round.

In this stylish new game from Jun Sasaki, components are kept at a minimum - there are only 15 cards and a handful of crest tokens.

Players each start with a random card in hand, and the rest is put in a pile at the center of the table with the first card flipped face up (this card is called the Kobayakawa).

The rules are simple: Each round, players take a turn and either discard their card face up in front of them and take a new one from the deck, or turn a card from the deck to replace the current Kobayakawa.

After each player has taken a turn, they each decide if they want to compete for this round by putting a crest token on their card. Players that decided to compete then all reveal their card at once and compare their number.

The player with the highest number wins, but the player that has the smallest numbered card also adds the number of the current Kobayakawa on top of it.

Player C has the highest card value (15), but Player A is declared the winner as the results of the lowest card and the Kobayakawa is 17. Have the most kamons at the end of seven rounds.

Give each player 4 kamons. Place 8 kamons in a stack at the center of the table. Place any remaining kamons back in the box. The youngest player is the start player.

Shuffle the cards and deal one to each player. All other cards are placed face-down in the middle of the table to form a deck. … 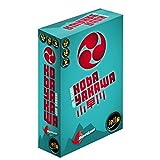