Players roll any or all dice, up to three times, attempting to obtain dice combinations fitting a scoring category.

Players fill 15 scoring boxes and add bonuses for a total score. The player with the highest total score wins the game.

This section scores points for ones through sixes. Players roll dice and score points for each die matching the scoring category.

The player continues by picking up the dice showing 5-5 for his third roll. The final roll shows 4-6. The player thus has 4-4-4-4-6 after three rolls. A score of 16 is placed in the "Four" scoring box - scoring four points for each four rolled.

Play is similar for each box in the Basic Section. Players may choose an alternative scoring, in either the Basic or Kismet section, at any time. After three rolls, one scoring box must be filled with a score or a zero.

Any roll can be scored in any open box where the numbers and colors fit the requirements of the box. A roll of 4-5-5-5-5 offers any one of the following scoring options:

The player rolling the second Kismet retains dice and begins next round. The same procedure applies for any additional Kismets.

After all 15 boxes are filled with scores or zeros, the Basic Section is totaled and the appropriate bonus is added. This score is placed in the scoring box at the bottom of the score sheet.

The Kismet Section is totaled. Total scores from both Basic and Kismet sections are added (including any bonus) for a total game score. The player with the highest total game score wins the game. 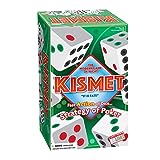 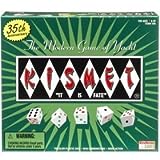 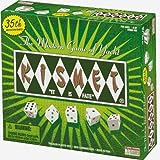