You are a Lord seeking new lands to expand your Kingdom. You must explore all the lands, wheat fields, lakes, mountains in order to spot the best plots. But be careful, as some other Lords are also coveting theses lands...

Note: Before your first game, assemble the 4 small castles.

Connect your dominoes in order to build your kingdom in a 5x5 grid in a way to score the most prestige points.

Place the box as indicated to the right. Each player takes:

ALL the dominoes are thoroughly shuffled, numbered side up, and then they are randomly placed in the box insert to form the draw pile of the game:

B A player takes all the kings in their hands, shuffle them thoroughly and then they get them out of their hands one after the other. When your king appears, place-it on an empty domino in the line. Each tile can only have one king. It means that the last player doesn't have any choice. (in a 2-player game, each player will choose 2 dominoes, one for each of their kings)

C When all the dominoes have been chosen, form a new line, as you previously did, by drawing new tiles.

The playing order is determined by the positions of the kings on the dominoes line.

The player, whose king, is placed on the 1st domino of the line (the closest to the box) starts. He must take the following actions:

In a 2-player game, each player will take the D 1 and D 2 actions twice, once for each of their kings.

Then, form a new dominoes line and a new turn can start.

The game is played in 12 turns in 3- or 4-player games, and only 6 turns in 2-player games (as each player plays twice each turn).

The players must build a kingdom in a 5x5 grid (each domino is composed of two squares).

In order to place down their domino, the player must:

If you can't add a domino to your kingdom fol- lowing these rules, the domino must be discarded and you will not get points for it.

All your dominoes must fit in 5x5 grid. If, due to bad planning, one or more of your dominoes could not fit, they are discarded. You will not get points for them.

When the last dominoes are lined up, the players will take a last turn but they will only take the D 1 action.

Each player should have in front of them a 5x5 grid forming their kingdom. (some kingdoms may not be complete if a player was forced to discard any dominoes - see above). Then, each player will calculate their prestige points for their kingdoms in the following way:

A kingdom is composed of different properties (groups of connected, either horizontally or vertically, squares of the same type of landscape).

Each property will give you as much prestige points as the NUMBER OF SQUARES multiplied with the number OF specific crowns appearing on the property.

You can have multiple properties with the same type of landscape in the same kingdom. ZA property without a specific crowns will give you no points.

Each player will add the points given by all their properties, the result is their final score. The player with the highest score is the winner.

In case of a tie, the player with the most extended property (whether he owns any crowns or not) wins the game.

Dynasty: Play 3 rounds in a row. At the end of the 3 rounds, the player with the highest number of points wins the game.

The middle Kingdom: score 10 additional points if your castle is in the center of your kingdom.

Harmony : score 5 additional points if you territory is complete (no discarded dominoes).

The Mighty Duel: With 2 players. After one or two practice games, the real champions battle to build the largest kingdoms: use all the dominoes to build a 7x7 grid (a pen and paper might be useful to keep your final score).

You can mix these different variants if you want according to what you prefer. 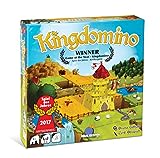