The enlightened monarch, Vladimiro Miritiro, has grown tired of reigning. He has chosen to hand off his crown, but who will be his worthy successor? Paladins, cooks, painters, and all the other subjects bustle about, seeking the throne in a whirling vortex of intrigue and subterfuge.

Play your cards cunningly, and bring your favorite to the top... Only one of the wacky subjects can be the next king!

The goal of the game is to help your favorites climb to the highest levels of the castle and to try to crown one of them as the new king.

Place the board in the middle of the table. Place the 13 characters next to the board. Shuffle the secret goals, and deal one face down to each player. You may look at your secret goal at any time, but keep it secret from your opponents!

The goal lists your six favorite characters. The order of the characters has no importance.

Each player chooses a color and takes the "Yes" vote card of that color. Deal each player the same number of "No vote cards, as follows:

The number of cards in your hand is kept secret during the game! Place any unused materials back in the box. Keep the crown, the note pad, and the pencil handy.


1. Placing the characters in the castle

Starting with the first player and proceeding clockwise, each player takes one of the characters and places it in the castle, until each player has placed the same number of characters:

The player may place the character on any floor of the castle marked 1, 2, 3 or 4. There can never be more than four characters on the same floor. The left over characters are placed on the floor marked 0.


2. Accession to the throne

Starting with the first player and always proceeding clockwise, each player on his turn chooses a character in the castle and moves it up one floor. If the next floor already has four characters on it, then that character may not be moved that turn.

Characters always move up. It is not permitted to move a character down.


Example: Rachel, Simon, Terry, and Paul have just finished placing the characters in the castle. It's Rachel's turn. She chooses to move Alighiero from the 4th floor (Dignitaries) to the 5th floor (Nobles).

She can't move Odessa up from the 3rd floor (Officers) to the 4th floor (Dignitaries), as there are already four characters on the 4th floor.

If the character is moved up from the 5th floor to the throne, he is nominated to become the new king! The players must immediately vote on that character. Otherwise, the turn is over, and the game continues with the next player.

The Election of the King

When a character is nominated as the new king, the players will vote whether or not that character should be crowned. The player who moved the character onto the throne takes the crown and places it before him: the crown represents King Vladimiro coming to check the election results.

Each player now must choose whether to support the nominee or not. Each player secretly chooses a vote card, and plays it face down in front of him. When all players have chosen, the cards are revealed at the same time:


Example: Terry moves Odessa up from the 5th floor to the throne: she takes the crown and puts it in front of her. A ballot is called to elect the new king.

All players choose what to vote, and cards are revealed simultaneously. Rachel and Paul voted Yes, while Simon and Terry voted No. The kingdom does not have a new king yet!

Odessa is removed from the castle. Rachel and Paul take their Yes votes back, while Simon and Terry discard their No votes into the box, and the game continues. Even just one No vote would have been enough to eliminate Odessa.

Example: On his turn, Paul moves up Alighiero onto the throne, and takes the crown. All players vote: they all vote Yes! The kingdom has a new king: Alighiero! The round is over.

The round ends as soon as a new King is crowned. All players now reveal their secret goals. Each player gains points (use the pencil and the note pad to keep track of the points) based on the position of his favorite characters in the castle:

Eliminated characters score zero points! Each player adds his score to his total from the previous round.

Example: A possible score at the end of the round.

Each player discards his goal and draws a new one. Each player takes all his vote cards back, including any No votes discarded.

Place all 13 characters next to the board. The starting player is the one sitting to the left of the player with the crown.

In the third round, if a player scores exactly zero points, he gets 33 points instead! (33 is the highest possible score in one single round).

The game ends at the end of the third round. The player with the highest total is the winner!

In case of a tie, the winner among tied players is the one who has the most favorite characters still in the castle at the end of the third round. 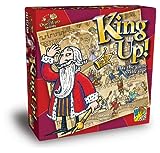