Keys to the Castle Game Rules Make your way across the grid of tiles, opening and locking doors. Be the first to cross the precarious maze of doors and reach the opposite side.

Leave about 1" of empty space between the doors if possible.

In a 3 or 4 player game, there will be 4 extra DOOR tiles. They are not needed. It doesn't matter which tiles don't get used.

Each player chooses a CHARACTER and places it on the outside edge of the Castle closest to them (no CHARACTERS begin on the Castle). Only one player can start on each side. In 2 player games, sit across from each other.

Shuffle the DRAW cards and deal three cards to each player. The remaining cards create a draw pile.

The player who most closely resembles their CHARATER goes first (Player 1). Player 1 takes the top card from the draw pile, to bring his/her hand up to 4 cards. Next, Player 1 plays a card (either onto the discard pile or the Castle).

And finally, Player 1 moves his/her CHARACTER (but only if possible or wanted).

Players ideally begin the game by opening a door along their starting side with a matching colored Key card. And unless the door is barred, players now move their CHARACTER into the open door, beginning their race across the Castle.

A player can move one tile per turn. They can move either forward, backward, left, or right. However, CHARACTERS cannot move diagonally (unless there is a Secret Passage).

After entering the Castle, if you find yourself blocked, you can always choose to use a move to exit the Castle (back to your starting side), and then re-enter the Castle on a later turn through a different door.

Only one CHARACTER may occupy a DOOR tile at one time. If someone is blocking your way, too bad!

Play moves clockwise around the table.

If the draw pile ever gets depleted, simply shuffle the discard pile and start a new draw pile.

DOOR tiles are two-sided. One side shows only closed doors - this is the side facing up at the beginning of the game. Players cannot pass through closed doors. The other side of the tiles have open doors, but sometimes the open side has a surprise.

Any player who lands on an Extra Key tile receives a bonus action. They are able to open or close another door (of any color).

Any player who lands on an Extra Turn tile receives a bonus turn. Just like a regular turn, players draw a card, play a card, and move their CHARACTER.

Players do not receive this bonus action just by opening the door. They must move their CHARACTER onto the tile to use the Extra Turn.

Used to open or close a door of the same color (i.e. a Blue Key opens or closes a blue door). Place the card on the discard pile when used. Opening a door helps you move towards your goal, while closing a door slows your opponents.

Used to block a door in order to obstruct your opponent's path. Place a padlock on the DOOR tile of your choice.

Used to remove a Padlock, or can be used to open or close a door of ANY color. Place the used Skeleton Key (and the removed Padlock) into the discard pile.

If the door under the Padlock was closed, it is still closed when the Padlock is removed.

This card is placed across the space between the corners of two tiles (on open or closed doors), and remains there for the duration of the game.

Used to permanently open a Barred Door. Place the Hacksaw card on top of the Barred Door, and leave it there for the remainder of the game.

There are only 3 Hacksaw cards in the game, so use them wisely.

Like a normal turn, your opponent must draw and play a card, however, they cannot move. They are trapped for 2 rounds. After the 2 rounds, remove the Net and place into the discard pile.

The first player to move their CHARACTER to an open door on the last row opposite their starting side wins!

You win immediately when you reach the last open door.

Keys to the Castle

Keys to the Castle multi-colour 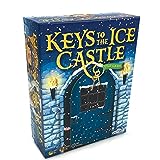