Now KerPlUnk! - one of the favorite games of all time - is more fun than ever! Just set it up, start playing, and watch out for marbles that go KERPLUNK!

To skillfully remove the sticks from the tube, dropping the fewest marbles.

1. The game base has compartments numbered 1 through 4. Each player selects a numbered compartment to use throughout the game. Choose a player to go first; play then passes to the left.

3. Marbles that drop during your turn will automatically go into your numbered compartment. Do not remove them -- just leave them there until the game is over.

When all the marbles have dropped into the game base, each player counts the number of marbles in their compartment.

The player with the least number of marbles in their compartment is the winner! 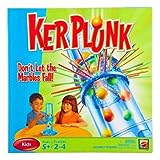 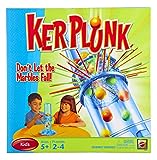