In Katamino the term PENTA refers to a group of Pentaminos which completely covers the space defined by the slider on the game board.

For example, a PENTA 4 indicates a challenge for which the slider is placed between numbers 4 and 5 of the game board: 4 Pentaminos must be arranged together to cover the four lines of the game board.

A pentamino is a game piece formed by 5 juxtaposed squares with at least one common side. (see exercise 1 and below figures)

A PENTA is a group of several pentaminos which perfectly fills the rectangle bound by the positioning of the slider.

For example a Penta 6 is created by laying the slider between the number 6 and the number 7 on the game board (see below).

There are 12 polygon pieces included in Katamino. Each of these pieces covers 5 spaces on the board and is called a Pentamino.

How to Play with One Player

The more pentaminos you use, the harder the game gets.


How to Play with 2 Players

Use all the pieces, except for pentaminos 1 and 12. One of the 2 players chooses 1 maroon rectangle, 1 maroon square and 2 red squares from the small pieces.

The other player chooses 1 maroon rectangle and 3 red squares from the small pieces.Then both players choose 1 pentamino at a time in turn until each has 5.

Position the slider on the board between the numbers 6 and 7. Each player must fill the rectangle on his/her side of the board as quickly as possible with all of his/her pieces

The Small Slams consist of 42 PENTAS. To begin your first small slam, Place the slider on the board between numbers 3 and 4, and then take the first 3 Pentaminos shown on the table on line A until column 3 and complete the PENTA 3.

Pieces must completely cover the area defined by the slider.

Once this PENTA is completed, move the slider up one space between numbers 4 and 5, add the Pentamino shown in Column 4 of Line A to the three pieces you just used , and then complete the PENTA 4 with those 4 pieces.

Continue solving PENTAS, each time adding the Pentamino shown in the next column and moving the slider up one space until you have completed PENTA 8 of Line A.

When you are ready for more challenges, start again on Line B, Line C and so on, until you have completed Line G. Once the 7 Lines are completed, the player has solved 42 PENTAS and completed their SMALL SLAM. Congratulations! You should try the more difficult challenges!

Using the tables on pages 7 and 8, follow the same rules to solve these 118 PENTAS.

And then, true Katamino masters move on to the Ultimate challenges...

For even more challenges, try to complete as many PENTAS as possible with all the pieces, progressively moving the slider up to increase the difficulty. This Katamino edition has thousands of possible combinations!

To play with two players, use the grid on the back cover of this book. Place the 12 Pentaminos next to the grid. The first player selects one pentamino and places it anywhere on the grid.

The piece must lay flat and completely inside the grid area. The second player then selects a pentamino and does the same. The winner is the last player to place a Pentamino completely on the grid.

To put Katamino back in the box, use this picture: 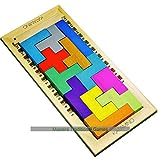 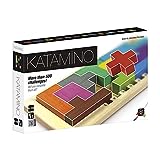