Yokai is an expansion for Kanagawa and requires the base game to be played.

Paint Kites, Lanterns, and Umbrellas in your Prints to earn new Diplomas. Beware of the malicious Yokai, who will try to steal your Harmony points

at the end of the game.

The Yokai tokens represent these cunning spirits. They can allow you to earn a Diploma during the game, but they will make you lose points at the end of the game if you don't get rid of them in time!

The Lesson cards are similar to those from the base game. They offer 3 new Main Subjects: Kites, Lanterns, and Umbrellas.

Some of these cards will bring a new Yokai into play, while others will allow you to get rid of one.

The set-up is the same as in the base game, with the following exceptions:

Choose 4 sets of Lesson cards that you want to play with; two from the base game and two from the expansion. Put the other cards back into the box.

Place the Yokai Diploma tile next to the other Diploma and Studio tiles. Next, pick out the Print Diploma tiles that correspond to the Main Subjects of the Lesson cards you have chosen to play with and sort them by color as described in the base rules. There should only be 4 categories of Print Diploma in use for this game.

Place the Yokai tokens next to the remaining Brushes within reach of the players.

Arrival of a new Yokai

, you must take one of the Yokai tokens from the reserve and place it in front of you, regardless of whether you choose to place the card in your Print or in your Studio.

If the reserve is empty, take a Yokai token from another player of your choice.

Movement of a Yokai

, give one of your Yokai to an opponent of your choice. If you have no Yokai, this symbol has no effect (you can't use it later).

Explanation of the Diploma tiles

Just as in the base game, at the end of your turn you may choose to either take a Diploma or to leave it. Some Diploma tiles have unique traits:

and 1 Brush if you have at least 3 yellow Kites in your Print.

and give one of your Yokai to another player if you have at least 3 blue Kites in your Print.

and the Assistant pawn if you have at least 2 red Kites in your Print.

and 1 Storm token if you have at least 7 Kites in your Print. They can be of different colors.

if you have 3 cards with 1 Lantern in your Print.

if you have 2 cards with 2 Lanterns in your Print.

if you have 3 cards with 1, 2, and 3 Lanterns respectively in your Print.

and give one of your Yokai to another player if you have 2 Umbrellas on one or more consecutive cards in your Print.

and the Assistant pawn if you have 3 Umbrellas on one or more consecutive cards in your Print.

if you have 4 Umbrellas on one or more consecutive cards in your Print.

Note : if a card has more than one Umbrellas, they count as being consecutive with each other. For example, a single card with two Umbrellas would be sufficient to earn the smallest of the Umbrella diplomas.

The end of the game is played out just as in the base game with one exception:

The cunning Yokai spirits steal your points. During the final count, subtract points based on the number of Yokai tokens that you have in front of you. 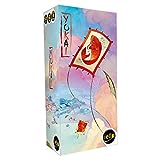