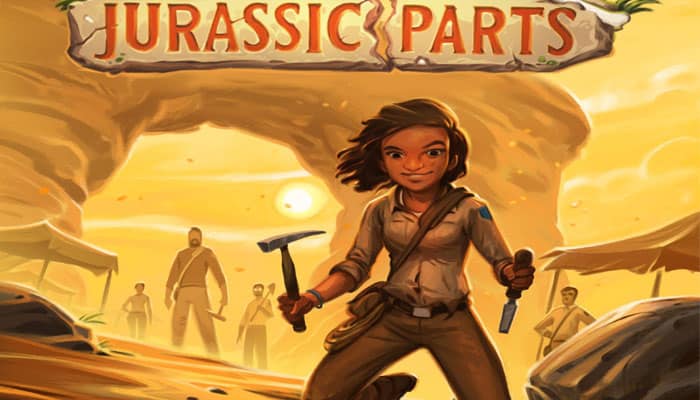 Welcome, Paleontologists! This is it! Your first field assignment! Over a dozen dinosaur fossils lie buried in a huge slab of rock.

Time and the relentless forces of geology have mixed up the bodies, but that's a small problem for your team. For now, sharpen your chisels and ready that hammer!

It's time to get cracking and liberate the precious fossils from their rocky tomb. For the good of science (and your own reputation) be sure to claim the biggest and best fossils for yourself!

Jurassic Parts is a game of area control for 2-4 players. All players have access to the same slab of rock. The goal is to split it apart and claim complete dinosaur skeletons. The bigger the better! Who wouldn't want a Tyrannosaurus rex in their living room...or a museum, if the price was right.

2 Cut the Fossils deck into nearly even halves. Flip one half over and add one Pile of Bones wild card to the face-down half.

3 Shuffle both halves together again. You should end up with a mixed deck of face-up and face-down Fossils.

4 Place the remaining Pile of Bones wild card face-up in the center of the table. Arrange the Fossils to the table in a hexagonal grid surrounding the Pile of Bones, face-up or face-down as they come. Leave a small space between cards. This is the Field.

5 Each player takes the 12 Break Line Sticks (Chisels) of her color. These go next to each player's character board, on the side marked for Dull.

6 Place the Fossil Leader board near the playing area in reach of all players along with the 20 Amber resources.

You are now ready to play!

The active player always moves three Chisels of her color from the Dull side of the player board to the Sharp side.

If this is not possible (ie: there are not enough dull Chisels to sharpen), move what you can and draw the remainder from your placed Chisels on the Field.

Sharp Chisels may be:

Played to the Field

Sharp Chisels may be played to the Field. Any space between two Fossil cards is a valid space to play a Chisel. Spaces beside only one Fossil (ie: the edge of the Field slab) are not valid spaces.

When a Chisel is played to the Slab, it becomes a crack. As cracks accumulate, the Field moves closer to breaking into two pieces. When, where, and how the Field breaks determines who gets which Fossils, and how many.

Chisels are played one at a time. Should a break occur, you must resolve the break before continuing to place more Chisels onto the Field.

The sides of each Fossil card may contain Rocks. This is hard terrain that is especially difficult to Crack. Each Rock dulls one Sharp Chisel before the last Chisel can be played to the space.

Play one Chisel to the space.

Spend (dull) one Chisel and play a second to be placed on the space.

Spend (dull) two Chisels and play a third to be placed on the space. Cracking any space in the slab therefore costs 1, 2, or 3 Chisels, depending on the number of Rocks in the way.

Players must completely pulverize the Rock in one turn. leaving the job half-done is not an option!

Remember that Chisels dulled in this way go to the Dulled side of your player board and only the last Chisel is played to the Field itself in order to mark your color on the Crack.

One Chisel may remain sharpened between turns. The remainder must be spent.


4. Conduct Transactions with the Field Leader


Purchase from the field leader.

Next 2 chisels ignore rocks. Place them on any available space without needing to dull extra chisels.

Sharpen 2 additional chisels. Standard rules apply on placement and saving of only 1 chisel for your next turn.

Take any fossil from the field excluding Bone Pile or any fossil that would cause a split.

Take any fossil from the field leader.


Sell to the Field Leader

Sell Fossil Leader 1 fossil for 1 amber. You may only sell one fossil per turn to the Field Leader. You may not sell a fossil from a complete dinosaur set after amber is collected, including Pterodactyls.

The active player declares his turn is finished. The next player in turn order repeats steps 1-3, until the Field is empty. Then the game ends.

At some point the Field may be completely Split into two parts by a line of Chisels. Splits may happen in the middle of a turn and must be resolved immediately before the turn may continue.

In most cases, the Field will split in two parts, one smaller than the other. Equal splits will be considered separately, below.

The smaller half is awarded to the players, according to their contribution to the split.

Note: Collected fossils that are not part of a complete dinosaur may be concealed from other players. This does not apply to plants and Pterodactyls.


Into two even halves

The active player decides which of two even halves will be broken up and claimed. Thereafter, the rules are the same as before (see Steps 1-5, above).

Entirely along the interior

It is possible for a loop of Chisels to completely Split the inside of the Slab from its outside. Novelty aside, this is an ordinary Split that can be resolved with Steps 1-5, above. Usually this will create a "hole" in the Slab, but if the exterior is the smaller half it will be claimed instead!

At any time or at the end of the game, the Bone Pile may be played as a "wild card" substitution for any missing Fossil piece.

You can also wait until the very end of the game to commit the tile. Once committed, you cannot move the wild card to another dinosaur.

You are able to complete dinosaurs during your turn as well as during another player's turn after you receive fossil tiles during the split. When you completely assemble a dinosaur with all of the required fossils, you immediately reveal the dinosaur and earn 1 amber from the Field Leader.

If you are the active player, you may choose to spend the amber as outlined in the "Conduct Transactions with the Field Leader" section.

Note: Pterodactyls are a complete dinosaur and earn you an amber when you receive it during a split.

Pterodactyls purchased from the Field Leader do not earn you an amber as their amber was already collected when recovered from the slab. Plants do not earn players amber at any point in the game.

Item cards are an optional modifier to enhance your Jurassic Parts playing experience. These work as one time use abilities that players can activate during the game, discarding the card after use.

You may choose to only give each player one card for less variability in the game, or may decide to give each player two cards for more ways to modify the game experience. The choice is yours!

During setup, shuffle the item cards together and deal 1 or 2 cards to each player. These are kept hidden until they are revealed for use. Return any leftover cards to the box without looking at them.

The game is over when all Fossil tiles have been claimed from the Field. When only two Fossils remain, the first player to Split them chooses one to keep and gives the other to the Field Leader, finish their turn, and then the game ends.