Be first to reach the gameboard center and call out Jumanji!

Shuffle the danger cards and place them facedown in drawpile on the gameboard DRAW space.

The player who suggested playing the game goes first. The player whose turn it is always gets the timer and the number die. Play then continues clockwise.

Roll the number die. Then move your pawn along your color path toward the gameboard center, the number of spaces shown on the die. Follow space directions only on your turn. When your turn is over, pass the timer and number die to the player on your left.

There are four different kinds of spaces. On your turn, do the following when your pawn ends its move on one of these spaces.

BLANK Spaces. Jungle dangers threaten you. Fellow players must try to rescue you by rolling the hourglass or the symbol matching the danger card. Here's how:

To rescue a player, all other players quickly roll their Rescue dice at the same time. Each of these players must roll continuously until a matching symbol or the hourglass is rolled.

Players must hurry - they only have about 8 seconds! The timekeeper announces when time runs out

The danger cards placed on the grid represent the dangers that are overtaking the town. As the game progresses, danger cards are added to the grid in the order shown in the illustration.

Try not to fill the grid with cards! If it fills up before a player reaches the gameboard center, all players lose! You must play the game again until someone wins!

Place cards in the direction of the arrow.

You're being sucked into the jungle, moving back space by space until a player stops you by rolling 5 or 8. It may take several rolls for your fellow players to stop you!

The player to your left now rolls the number die once.

ALL players (including you) are trapped in the jungle! You must ALL roll to rescue each other; your turn does not end until you are successful.

On these treacherous spaces, you may be forced to add several danger cards to the Doomsday Grid!

All players quickly roll their Rescue dice together. Keep rolling continuously until the needed symbol or hourglass is rolled. The timekeeper announces when time runs out.

If ALL players roll either the matching symbol or the hourglass - players are safe. ALL players move their pawns ahead the number shown on the card. Players do not follow space directions. Place the card in the DISCARD pile. Your turn is over.

If ONE or more players fail to roll either the matching symbol or the hourglass, place the card on the next empty Doomsday Grid space. All players stay put while you draw another card.

All players repeat the above steps until ALL players roll that card's matching symbol or the hourglass. You may need to draw several cards before you're safe. Your turn is then over.

You may, if you wish, put the rhino figure on the space directly ahead of any pawn (except on the gameboard center), to block that player from moving.

If your pawn is blocked by the rhino, roll the number die once on your regular turn.

The Rhino Follows You: If your pawn is blocked by the rhino and moves backward, move the rhino along with it (always making sure it stays on the space just ahead of your pawn).

IMPORTANT: If the die or card number is less than the spaces you need to reach the center, move your pawn the number of spaces shown.

However, if the die or card number is more than the spaces you need to reach the center, keep your pawn where it is. If it's your turn, follow the directions for the space you're on.

More than one player can reach the gameboard center on the same turn - but the winner is the one who yells JUMANJI first.

If the Doomsday Grid fills up before a player reaches the gameboard center, the ungle has overwhelmed you, and all players lose! You must play the game again until someone wins!

Using random cards from the card deck, add 1-6 danger cards to the Doomsday Grid before you start. See if you can beat the odds!

Play by the regular rules with one exception: The hourglass is no longer Wild on the Rescue dice. 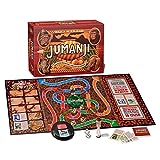