Everyone draws 7 cards. Place the rest in a deck, face down on the table. Pick the first judge through non-violent means.

The deck plays first. Flip the top card off the deck. This is the starter panel.

The judge plays second, by placing a card from their hand on either side of the starter panel, creating a two panel setup.

The other players play a card, face down, at the end of the setup to create the punchline. The judge shuffles the punchlines and puts them face down one at a time, and then picks their favorite.

The winning player takes their card back for scorekeeping.

Everyone draws another card (you should always have 7). Going clockwise, the next person becomes judge, and so on.

The first player to 3 points is the winner, or whatever score you wanna go to (we're not your mom).

When a card has a red border, it can only be played as a third panel. If the deck plays a red card, the judge does not play a second panel.

Instead, everyone else plays the two panel setup, and the judge picks their favorite. Whoever wins gets two points instead of one. Bonus!

Joking Hazard is very open-ended, and we definitely suggest tweaking the rules with your friends. Here are some of our favorite alternative ways to play:

Jerk Mode: Same as the default rules, except when the deck plays a red card, instead of it being a bonus round, the judge keeps the red card as a free point, and forces someone else to lose a point. It's like a ticking time bomb of unfairness.

Marathon: Instead of 3 points winning the game, keep playing until the the deck runs out. Whoever has the most points at that time wins. If it's a tie, the lowest scoring player becomes judge and plays two panels, and everyone who is tied plays the punchline.

Neverending Story: Remove all the red cards from the deck. Everyone takes 10 cards. Going clockwise, each player adds a panel, creating one super long comic.

The rest of the players can reject a panel if it doesn't make sense, via majority vote, If you can't play a card that makes sense, trade any card from your hand for two additional cards, and skip your turn. First player to run out of cards wins. 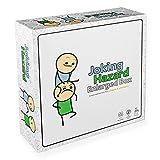 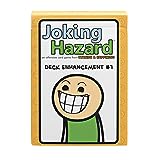