Jeopardy! is the unique quiz game in which the players are given the ANSWERS and must ask the correct QUESTIONS to win. Since you can win or lose money with every question, your money is always in "Jeopardy!"

Ask the correct questions and accumulate the most money after three rounds of play: "Jeopardy!", "Double Jeopardy!", and "FINAL Jeopardy!".

Turn the see- through plastic game board over so that the back is facing up. Now hold the backboard piece so that the two indented "handle parts" are at the top hollow side out.

Press this piece into the back of the gameboard so that you now have formed a sort of envelope where you can place the answer sheets. Slide the Display Board legs onto the bottom of the Display Board.

Carefully separate the 25 dollar-value cards and place them, blue side up, in the slots on the Display Board as shown in Diagram #2. The values should range from $200 across the top windows to $1000 across the bottom windows.

Choose a player to be the emcee, or "host", of the game. The emcee will also act as banker.

The emcee then hides the blue DAILY Double card underneath any one of the value cards so that none of the players knows its location.

The emcee then gives each player $1,000, a contestant clicker, and pencil and paper (not included) to use in FINAL Jeopardy! Round.

There is one Daily Double in the Jeopardy! Round. When a dollar-value card is removed revealing the Daily

Double card under it, here is what to do:

After all 25 answers have been exposed, the Jeopardy! Round is over, and the emcee prepares the game for Double Jeopardy!.

Only those players who have money can compete in FINAL Jeopardy!. This is the last chance for players to increase their winnings.

The Game: Players count their money, and the player with the most money wins the game. 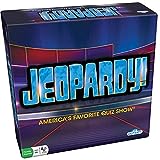 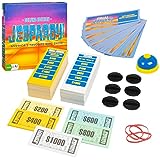