For a wider range of wacky stories, let all players be Jabbers. All Jabbers choose a theme card, pictures, and word tiles themselves. Jabbers will want to keep their words and pictures secret so no one can guess their identity.

When time is up, players text or give their stories to a designated Reader. Change readers for each round. After all the stories are read aloud, each person votes for his or her favorite story.

The player winning the most votes gets a card and all players who incorporated all the elements also win a card. If there is a tie, the player acting as the Reader for that round casts the tie-breaking vote.

In this variation, the Jabber picks the Theme Card and pictures but not the word tiles. Instead, each player chooses 10 word tiles. When the timer begins, players must use their word tiles within their story to win a point.

When time is up, players text or give their stories to the Reader. Again, don't worry about the sentences making sense - they probably won't!

But they will be hilarious. After the reader reads each story, the Jabber chooses the one he or she likes best and awards that player a card. All players who used all the pictures, words, and theme also win a card.

Want to mix up the way the game is played? You could choose to have players pick their own word tiles or decide the best story with a group vote.

You could also drop the theme and let players come up with their own themes. Or the Jabber can make up a theme. To simplify the game, you could also limit the cards included in a round to one or two.

There are a number of ways to make the game even more wacky - feel free to try something out! The combination of cards and words you can choose are virtually limitless so you'll be able to have hilarious fun for hours on end! 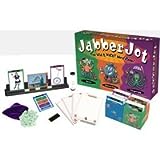