Students attending the Isidore School of Magic are trained to become Wizards and Witches... and you're one of them! But, before qualifying top of your class, you have to prepare your ultimate magic spell.

You need three rare treasures from the Kingdom of Calandria: a tear from the Water Nymph, a tooth from the Fire Dragon and an emerald from the Rock Giant. But these mythical creatures won't give up their treasure without a fight!

As a student of magic, you will need to show what you've learned at Isidore. You will need to trade ingredients, compose spells to control the elements of Rock, Water and Fire, and ultimately win the duels!

To qualify as top of your class from the Isidore School of Magic you have to collect three treasures from the mythical creatures dwelling in the Kingdom of Calandria.

Only with these items can you prepare your ultimate magic spell and complete your studies!

The first student to return to school with these three treasures will be awarded his or her Isidore School of Magic Diploma, thus winning the game!

All of the students start at the Isidore Academy of Magical Arts. The youngest student heads off on the adventure first. Throw the dice and move your student.

You can choose how many steps to take, as long as it doesn't exceed the number of dots on the dice thrown.

For example, if you throw a 3, you can choose whether to move 1, 2 or 3 steps forward. NB! The roads to Calandria are very narrow. For this reason, we only move clockwise.

If you throw the magical stars, you can magically beam yourself to a field of your choice! This could also be the field where you were originally standing...

You can collect, buy or trade ingredients throughout the Kingdom of Calandria. You need these ingredients to make your Rock, Water and Fire spells. You can find all of these items in Calandria:

Place the ingredient face up on top of the collection card in front of you so that the other students can see what you have collected. Top up the ingredients in the Green Forest using an ingredient from the stack. Make sure that this ingredient is face-down.

You can find gold and silver at the mines of the Steep Mountain path. You can use the gold and silver tokens to buy ingredients at the markets in the village of Azurro and at the Lighthouse of Calandria.

If you stop on the Steep Mountain path you can take one of these gold or silver tokens.place the token face-up on top of the collection card in front of you so that the other students can see how rich you are.

Top up the stocks of the mines of the Steep Mountainpath with tokens from the stack. Make sure the gold or silver tokens are face-down.

In the village of Azurro and at the Lighthouse of Calandria there are markets with merchants selling their wares to the residents. You can buy or trade any ingredients you need here.

Once you have gathered all the necessary ingredients for a spell you return to school. You can only transform your ingredients into a spell at Isidore. There are three different spells: Rock, Water and Fire.

The top spell card of the stack shows which ingredients you need to make the spell. If you're at Isidore and you have all the ingredients needed for a Rock, Water or Fire spell, you can take a spell card.

Put the spell card face-down on your collection card so that the other students cannot see which spell(s) you have collected. The ingredients go back on the stack afterwards.

You may trade as many ingredients as you choose during your turn, to obtain different spell cards, but you may only have one spell card for each element on your collection card.

If you have a spell card in your possession, you control that element. The three spells are very important because you need them to duel with one of the three magical creatures of Calandria.

Three centuries-old magical creatures live in the corners of Calandria: the Fire Dragon, the Rock Giant and the Water Nymph. They guard the three treasures you need to graduate. These very rare treasures can only be earned by challenging the magical creatures to a duel.


Duelling with a Magical Creature

The magical creatures are powerful and always have three different duel cards (Rock, Water and Fire) to counter your attack. To challenge a magical creature you have to land on its field and be in possession of at least two of the three spell cards at that point:

Whoever is the first to win two rounds, wins the duel.

The player to the left of the attacking student stands in to play on behalf of the magical creature and takes the three dark duel cards.

As in the 'Rock-Paper-Scissors' game, the student and the magical creature choose one of their spell cards (duel cards), which they place on the table - at exactly the same time - after reciting the magical spell I-SI-DORE (as in one, two, three!).

Tip: It would not be wise to duel with a magical creature if you have less than three spell cards. But you may get lucky and beat the magical creature, thus gaining possession of the treasure.

If you're the first to win two rounds of the duel, the magical creature gives you one of his or her treasures. Take good care of your treasures, because you'll never get a second one.

If the magical creature wins you have to wait until your next turn before you can challenge the creature again.

The first student to collect three treasures can return to school, where they will be awarded a diploma from the Isidore Academy of Magical Arts. This student also wins the game!

Because some students have been attending Isidore for a longer period of time, we're going to make it more difficult for them!

If the Fire Dragon beats you, you have to place the Fire card under the stack.

If the Rock Giant beats you, you have to place the Rock card under the stack.

If the Water Nymph beats you, you have to place the Water card under the stack.

If, as an older student, you land on a field occupied by another older student during your turn, you may - if you wish - choose to challenge him or her to a duel (if there are more than two students on a field, the attacker chooses who they wish to duel against).

Dueling with a fellow student is the same as dueling with a magical creature, except that dueling between students only lasts one round.

Your turn ends after the duel. Nothing more may then be collected, traded or purchased. Both students keep their own spell cards.

Tip: It's possible that a student cannot win a duel yet because he or she does not have any spell cards let alone the correct one.

For this reason, try to remember which spell cards the other students (don't) have before challenging them to a duel! You always beat a player who doesn't have any spell cards yet. 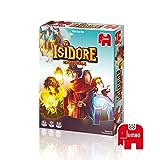