Be the team to score the most points after 6 rounds by working together to draw and guess the secret word on the drawing cards.

Divide players into 2 equal teams. Teams can have 2,3, or 4 players per side. Shuffle the stack of drawing cards and place the stack face down in the center of the playing area along with the drawing board, marker, spinner, and timer. You will need a piece of paper and a pencil to keep score.


Familiarize all players with the cards. There are two types of cards in the deck:


Familiarize all players with the spinner. The spinner determines who will wear glasses during the round.

Select a team to go first. A player from that team spins the spinner to determine which teammates will be wearing glasses through the turn. Choose one person to draw first, trading off during each of your team's subsequent turns.

Team members put on glasses based on what has been dictated by the spin. The drawing board should be placed at an arms distance from the drawing player so there is no peeking and to make sure all teammates can see the drawer's hand and the drawing board.

As soon as the timer is flipped, the drawer quickly takes one drawing card to find out what word they will be drawing for their team to guess.

Note: The words on the cards are easy to read even with the glasses on. The drawer can announce if the card has a forbidden word or not.

The other team should also look at the drawing card to help oversee the round.

When drawing, the drawer can only draw and point; no verbal clues can be given and no written language can be used. Symbols, numbers, and abbreviations are acceptable.

Players should shout out any guesses they have unless there is a forbidden word. In that case, players may want to be more careful about random guesses. If any teammate says the forbidden word, play stops, and no points are scored in that turn.

If a teammate guesses the word, play stops, and the turn is scored. Once a team completes their turn, the other team has a chance to draw. A round ends when both teams have taken their turn.

The team with the most points at the end of 6 rounds wins.

As you begin to master the game you can increase the rounds to a number of your choosing and you can aIso enjoy the game without keeping track of score!

If you want to add an extra challenge, you can choose to play two drawing cards during your turn, as long as you play within the time allotted by the timer.

Sally and her team (Greg, Margret, and Joe) go first and decide Sally will be the drawer. Sally spins the spinner and it points to "Guess" so Greg, Margret and Joe wear the glasses.

The opposing team then flips the timer, Sally quickly picks up one card from the stack and it reads, "Draw Banjo. Don't Say Guitar". Sally announces if it is a forbidden card to her team then show it to the opposing team before rushing to draw on the drawing board.

Sally's team then has forty-five seconds to guess what Sally is trying to draw. If anyone on Sally's team says the word, "Guitar" their turn instantly ends and they don't get any points. The opposing team then takes their turn. 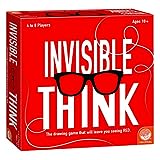