Each module can be used separately, or you can use them both at the same time.


Module 1 - The Spirit of the Great White

The Spirit of the Great White module adds an extra layer of interaction to the game by introducing a direct conflict between player villages.

If you want a slightly more competitive game, add all components from this module to your game.

All cards from this module have

printed in the middle of the right edge of the card.

The only changes introduced to the game come from the new types of cards. Below follows a list of new cards included in the Spirit of the Great White module.

Important: If you draw a Conflict card depicting the symbol of your own village, remove the card from the game and draw another card from the deck as replacement.

There are 2 special Legendary Characters that work slightly differently from the rest:

Important: Unlike regular Inuit cards (which can add or subtract 1 or 2 Victory Points, depending on their color), each Legendary Character (apart from the Drum Dancer) subtracts 4 Victory Points from your final score.

Please note that the Legendary Healer does not provide you with the ability to score 8 Victory Points, but for all intents counts as 2 Inuit cards in your village.

During your turn, you may take only one Great Game card of each type - but you can still take more regular Game cards.

This card functions like any other Rite in the game.

The Arctic Wolf - Spirit of Blood

This Spirit scores 1 Victory Point for each Weapon in your village.

The Rising Sun module adds more seasons to the game, each with its own special effects and influence on the game.


All cards from this module have

printed in the middle of the right edge of the card.

The game follows all basic rules, except for the active Rising Sun effect which you must always consider during your turn.

In other words, during any given game, Sunrise will be active first, then High Sun, and finally Sunset. Whenever a Rising Sun card is revealed (and becomes active) you must immediately draw a replacement card.

The effect of each Rising Sun card is outlined on the card itself. Resolving the effect is optional (a player may decide to ignore the Rising Sun card), unless the card states that its effect must be resolved, or if it is the Polar Nightfall card, which ends the game as normal.

If a card requires you to discard a card from your village, the discarded card is removed from the game - place it back in the game box.

Your copy of Inuit: The Snow Folk came with 2 cards described nowhere else in these rules. These cards are promotional items for 2 other games published by Board & Dice.

If one of the following games ever enters your collection, you will have some extra content to play with! Otherwise, the cards also make great small gifts for any friend who has a copy of Dice Settlers or Dust in the Wings.

This card is a promo item for Dice Settlers, a light civilization game of dice bag building, expansion, and area control, featuring fast gameplay, amazing art, and over 50 custom dice!

Simply add the Merchant Routes promo card as an option when setting up your Technology tableau.

This card is a promo item for Dust in the Wings, a light strategy game of clever maneuvering, where you try to position beautiful wooden butterflies on a meadow board in order to take the best photos and score the most points.

Add this card to the Gathering deck. To fulfill it, you must end your move on a space that contains 5 butterflies: 1 red, 1 blue and 1 yellow butterfly, and two other butterflies of any color - as long as it is the same color (both are blue, both are red, or both are yellow). 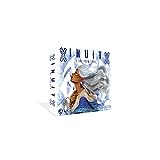