Do we really have free will? Are we controlled by what we hear and what we see, even when we think we decide freely?

Talk to the other players and try to find the right answers or find the insider who manipulates the discussion, and they will do everything possible to hide their identity while cheating others. This game will have a round with the phases described below.

Will commons be able to identify the insider and win the game?

Mix the role tiles and give one to each player. The player who is the judge shows his role to the other players. Other players keep their role hidden

The judge should perform and say the following:

#Everyone close their eyes.

The judge turns the hourglass (with all his time).

The players talk trying to find out who is the insider (John's question was not very sudden? Why did you ask that question? Etc).

You can stop this phase before time runs out if you wish.

Players should raise their hands if they believe that the player who succeeded in the subject is the insider. The judge also votes.

That player reveals his role.

The player with the most votes is the infiltrator? 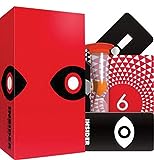