In a Pickle Game Rules Before You Play! There are two different ways to play this game, depending on the mood of the group. For a highly creative game with opportunities for lively debate, follow the regular rules.

Win the most rows of cards by playing the "largest" noun in an ever-changing string of cards.

Remove the card holder from the box and place it within reach of all players. Select a person to deal five cards face down to each player. Players look at their cards but keep them secret from opponents.

Place four additional cards face up in the middle of the playing area in a plus shape with the arrows on the cards pointing away from the center.

The player to the left of the dealer goes first and continues clockwise.

On your turn, play one noun card from your hand face up to any of the four rows that either fits inside or that is larger than one of the outermost cards already in play.

Note: the arrow on the cards indicates the direction of larger.

If the noun on your card is larger than one of the outer cards, place it so that it overlaps the card furthest from the center.

If the noun on your card is smaller than one of the outer cards, place it underneath the card closest to the center in any of the rows.

Remember, you may only play a card over the largest or under the smallest card in each row. You cannot play it between two cards.

Use your imagination and be sure to announce your play as you go. For example, " There are Thoughts in the Head".

If you can't play a card or choose not to play one, you may exchange up to three cards and skip a turn.

Put the card(s) you don't want at the bottom of one of the face down decks and draw the same number of cards from the top of any deck into your hand. This ends your turn, and play moves to the person on your left.

Draw from the deck to bring your hand back up to five cards at the end of each turn.

As mentioned above, you are encouraged to think creatively and play cards that might not "fit" in an obvious way. However, other players may challenge your play if they don't agree with the logic of the fit.

If another player offers a challenge, you get a chance to defend your card by making a statement for your case. For example, "Yes, you can fit a Turkey in a Purse. It's sliced turkey".

After a short time for debate (keep in mind; this is supposed to be a friendly game, not the Supreme Court!), all players vote (except the challenged player), using thumbs up for "okay" and thumbs down for "no way".

If more players vote that your card fits, it stays in place and the game continues as usual. However, if you lose the challenge, you lose your turn and play continues to the left.

Remove your card from the playing area and discard it to the bottom of a draw pile, then draw a new card from the deck. Note: If there is an even number of players voting and there is a tie, the decision goes in favor of the challenged player (the card stays).

If you play the fourth card to any row, you start a Pickle Round, in which all players vie to win that row of cards. Starting with the player to your left and continuing in order, each player gets one chance to play a card that is LARGER than the card furthest from the center.

If you don't have a card that can beat that card or don't want to play a card, say "pass", and play moves to the left.

The round ends with the player who started the Pickle Round getting one final chance to trump the last card played.


Whoever played the largest card, wins the round. That player collects the row of cards and places it face down in front of him or her. Then start a new row by drawing a card from the deck and placing it face up in place of the old row.

(There should always be four rows in play). All players replenish their hands back up to five cards, and play continues as normal to the left of the person who started the Pickle Round until someone places the fourth card in another row.

During a Pickle Round, you can only play cards that are larger than the largest card in the row.

To win, be the first player to collect the required number of rows of cards:

Play using the rules above, however every card played must relate to ALL the other cards in the row, not just the one it touches.

In other words, each row should tell a "story" of sorts. Be sure to announce the whole row to the group each card you play.

In the second example, you could not play a card such as Atlas on top of New York because the other words in the row do not relate.

Furthermore, words with multiple meanings (i.e., Jam, Spring, Change), still need to relate to all the words in the row. However, challenges, Pickle Rounds and all other rules still apply 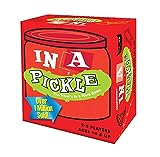 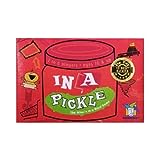