Be the first player to reach the Winner's space!

To begin, write the name of each player on one of the blank, numbered spaces on the game board, using the dry erase marker. If there are fewer than eight players, fill the empty spaces with the names of people all of the players know.

You can use the names of celebrities, fictional characters, - you decide!

Note: at the end of every game, erase the names on the board so that the ink doesn't set over time.

Each player should choose a colored mover and the group of number cards that matches that color. Place each mover on the START space.

The numbered cards, 1 through 8, match a name written on the board and will be used to vote. Place the ? token on the number 1 name space. The ? token will let you know who will be the subject of each card.

Each set of question cards - divided by the colors on the back of the cards - should be shuffled individually and placed into three piles, near the game board.

On each turn, the player rolls the die. The die will tell you two things:

For example, the die shown means that a gray question will be read. (This is the EVERYBODY category).

For each turn , a player will draw a card from the appropriate deck and read the Imagin question . ( Category instructions follow).

After the question is read, players will make their choice by voting with a number card. These cards are placed face down so the voting is secret!

When EVERYONE has voted, including the reader, all cards should be turned over. EVERYONE who VOTED for the winning name gets to move the number of spaces shown on the die.

If more than one answer gets an equal number of majority votes, ALL the players who voted for ALL those answers get to move.

If ALL players voted for a different answer, NO ONE gets to move forward.

If red is rolled on the die, the reader should choose the top card from the CHOICES pile. Next, they should move the ? token to the next name, in numerical order, on the board.

They will insert this name in the blank space when reading the card aloud. Players choose from the multiple-choice answers and vote.

For example: The question reads:

The next name on the board is Marcia so the player reads: Imaginiff Marcia were a TV show. Which would they be?

If gray is rolled on the die, the reader should choose the top card from the EVERYBODY pile and read aloud. Players will choose from all the names on the game board when voting.

If black is rolled on the die, the reader should choose the top card from the VERSUS pile. Next, they should move the ? token to the next name, in numerical order, on the board. They will insert this name in the blank space when reading the card aloud.

The question reads: Imaginff _______ and I were both bicycles. Who would have training wheels?

The next name on the board is Pat so the player reads: Imaginff Pat and I were both bicycles. Who would have training wheels?

For VERSUS only, in the event the ? mark lands on the reader's name, move to the next name on the board.

The first player to get their mover to the final space wins!

If two or more players tie, everyone plays a tiebreaker round to determine the winner.

The game is played as normal until one of the tied players emerges victorious. More than one tiebreaker round may be played, if necessary. 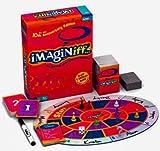