How much color can you really see?

The information on the back of each color card indicates what percentage of the card is represented by each color.

Note: The percentage values relate to the printable white area on the card (the grey border is not included).

The green proportion must become progressively higher from card to card, following the direction of the arrow. Immediately next to the arrow, just a small amount of green can be seen.

On the following card, there is already significantly more. On the third card, quite a lot of green is apparent and all the way over on the right, there is a huge amount. All correct so far!

As each player takes their turn, they must decide either to query the validity of the entire row so far or they must take an additional color card from the deck and insert it (hopefully correctly) into the row.

The 98 color cards are also shuffled and are placed with the color side facing up in a deck on the edge of the table, alongside the stack of arrow cards.

The top color card is taken from the deck and placed face up next to the arrow in the center of the table. Warning: The back of the color card (percentage information) must not be seen.

The top arrow card (red) is turned over and placed in the center of the table. The top color card from the deck is placed alongside.

Lots are drawn to decide who should start. The relevant player takes the top card from the color card deck and must place it alongside the color card which is already there, either to the right or to the left, following the direction of the arrow.

Very important: It is crucial to prevent the back of the card with the percentage information being seen.

Tim takes the topmost color card from the deck and places it to the left of the card which is already there. By doing this, Tim suggests that the proportion of red increases from left to right.

If the player believes that the entire row is correct, they take the top color card from the deck and insert it into the existing row: all the way to the left, or all the way to the right, or between two cards. After the new card has been inserted, the cards can be realigned so they lie neatly in sequence.

Note: It is not permitted to retrospectively swap over any cards which were played earlier.

Sarah takes the next color card from the deck and places it be- tween the cards which have al- ready been played.

Now it is the turn of the next player in a clockwise direction, and they must decide for themselves whether they believe that the order is correct for the entire row so far, or whether they would like to question the validity of the entire row.

Provided no- one questions the sequence, play continues in a clockwise direction, as described, with the row growing by one card after each player's turn.

Lucas and Emma take their turns one after the other, and each of them inserts a color card into the row.

If it comes to a player's turn and they do not believe in the validity of the entire row ,they must say loudly and clearly "I don't believe it".

When this happens , all the cards played so far are turned over and the percentage values are inspected to work out whether or not the sequence was correct. The row is deemed to be correct , if the percentage values get progressively higher from left to right following the direction of the color arrow.

Note: If two immediately adjacent cards have identical percentage values, this is considered to be correct.

Tim does not believe Emma that the entire row is correct and he declares his suspicion . All five cards are turned over. And indeed, after 16% comes a low er value (11%) - that is an error.

If the player queries correctly , i.e. there was at least one error in the row ( regardless of who actually committed this error !), the questioning player receives the arrow card as a reward.

If the player makes an incorrect query (i.e. the entire row was correct), then the arrow card is awarded to the player who put down the final color card immediately before the questioning player.

All the color cards are removed from the center of the table and are no longer required . Now the next round is played. The game is prepared and the next round played exactly as described above.

The new round begins with the player who previously received the arrow card. Further rounds are played in the manner described until someone obtains 3 arrow cards - that player is the winner.

Of course, you could also play 12 rounds. Then the winner is the player with the most arrow cards. 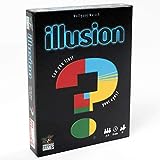