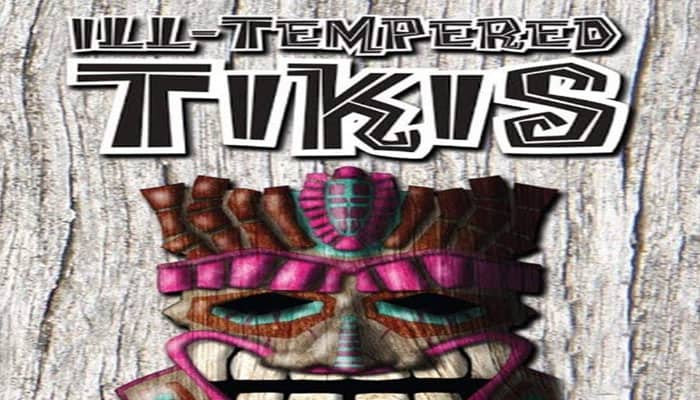 The natural forces in the South Pacific are out of alignment. The balance of power between the Tiki gods is in chaotic disorder. The Tiki families are at war with one another. Be the first player to collect a complete family (5 different Tikis of a single color) and bring peace and harmony back to the South Pacific.

If you are new to this game play this version first.

Players compete to see who can collect a complete family of Tikis. A family is 5 different Tikis all of the same color.

Shuffle all the cards together and deal each player 3 cards. Place the remaining cards in a pile face down. This will be the draw pile.

To create a 5 card family of Tikis. The family must consist of all 5 different Tikis and all the cards must be of the same color. Your cards on the table, matched or mismatched, are referred to as your Tiki family.

On a player's turn they draw 1 card from the draw pile or the discard pile. (See Discard Pile Rule). They then have 3 possible options:

The third type is the "king of wilds" - it allows your Tiki to be any Tiki god of any color. Wild cards can be placed into your family or into an opponent's family.

The first player to collect a complete Tiki family, 5 different Tikis all of the same color, wins.

If the draw pile ever runs out of cards simply shuffle all the cards from the discard pile and place them upside down to create a new draw pile.

At the beginning of the game each player has no Tiki cards in front of them so they have to build their Tiki family one card at a time from nothing. Your first 5 turns you are just drawing a card from the deck and placing a Tiki in front of you. If you have an empty "space" in your Tiki family you must fill that first.

The cards you place in front of you for building your Tiki family do not need to match in color or may have similar Tikis gods. In fact, toward the beginning of the game they probably will not match in color at all or be all different Tikis gods. However, you need 1 of each Tiki in the same color to win the game.


Why play a wild card in an opponent's Tiki family?

It could mess them up... If player A is collecting yellow Tikis and has, in their Tiki family, a yellow Laka, a yellow Ku, a yellow Lono, a yellow Kane and a blue Kane then all they need is a yellow Maui (to put in place of their blue Kane) to win.

If player B draws a Laka that is any color (a wild card) it could be used to play on one of player A's yellow cards, such as the yellow Ku, which would cause the yellow Ku to go to the discard pile, and make it so player A now has 2 Lakas, 2 Kanes, and one Lono.

Now player A is two cards away from winning instead of one.

And if the ''Discard Pile Rule" did not exist then player A could just pick up the yellow Ku from the discard and place it back in their collection... But it does exist so they cannot!

Use the flowers on the upper corner of the cards to easily identify the wild cards. Separate the wild cards from the rest of the deck.

Create 2 shuffled draw piles - one for the regular cards and one for the wilds. Deal each player 3 cards from the pile of non-wild cards.

The rules of play are the same as the even-tempered rules except for the following two rules:

Example: Player 1 discards a Blue Ku, Player 3 quickly plays a Red Ku into the discard pile then draws a wild from the wild draw pile. The game then continues with Player 2 taking his or her turn.