The young ice giant has a big problem: he wants to buy fish sticks, but he cannot remember how many and he has nine shopping lists in his basket.

So he goes from igloo to igloo and shakes each. In each he listens to the delicious fish sticks bouncing off the igloo walls. When he thinks that the igloo in his hand has the same number of fish sticks as one of his shopping lists, he takes it home.

When he gets home, there are no fish sticks in the igloo. Instead, wild and laughing Eskimo children tumble out of the igloo. Excitedly they shout, "Shake us again!" "That was great fun!" "This is super", thinks the young ice giant. "Now, I have found some new friends to play with!" And, he promptly forgets all about his shopping lists.

The player who gathers the highest-valued cards and collects the most ice giant talers will win the game.

Place the filled igloos in the middle of the table arranged like an igloo village.

Shuffle the cards thoroughly and place in a stack face down on the table. Draw the top-most 9 cards from the card stack and place them face up in a circle around the igloo village.

Each player chooses a color and takes the 10 talers in that color, placing them in his play area.

Cards with only one number are the hardest to gather, as the players must find the exact right igloo to get the card.

Accordingly, these cards have 3 Eskimos and are worth 3 points each. Cards with 2 numbers are somewhat easier to gather as the players can choose between two correct igloos to get the card.

These cards have 2 Eskimos and are worth 2 points each. Cards with 3 numbers are the easiest to gather, but have only 1 Eskimo and are worth only 1 point.

The youngest player counts to 3. On 3, each player, simultaneously, takes one igloo from the igloo village and shakes it. Players must always follow the shaking rules (see below) when shaking igloos.

While shaking an igloo, a player tries to determine how many beads were in the igloo, by listening to and feeling the vibration of the glass beads tumbling inside the igloo.

If he believes that the number of beads inside the igloo matches one of the number on the face-up cards, he puts one of his talers in the notch in the igloo to mark the igloo as "his" and puts the igloo on the card.

Players may place more than one igloo on each card.

The round ends when all igloos have been placed on the face-up cards or when no player wishes to shake and place any further igloos.

Next, the players check the igloos on all cards that have igloos on them, in clockwise order (the players may choose any card to start the checking).


1. there is just one igloo on a card

If the number on the bottom of the igloo exactly matches one of the numbers on the card, the player whose taler is on the igloo takes the card and his taler, putting them in his play area.

If the number on the bottom of the igloo does not exactly match one of the numbers on the card, the taler is returned to the box and the igloo to the igloo village.

The card remains where it is.

2. There Are Several Igloos on a Card

If all the igloo numbers exactly match one of the numbers (not necessarily the same number) on the card, the player whose taler is in the highest numbered igloo takes the card, putting it in his play area. All players take their talers back, putting them in the play areas.

If only one igloo number exactly matches one of the numbers on the card, the player whose taler is in this igloo takes the card, his taler, and all his opponent's talers from the other igloos on the card, putting these in his play area. He returns all igloos from the card to the igloo village..

If some, but not all the igloo numbers exactly match one of the numbers (not necessarily the same number) on the card, the player whose taler is in the highest numbered igloo takes the card, putting it in his play area.

He also takes his opponent's talers from the igloos on the card whose numbers do not exactly match one of the numbers on the card.

If an igloo number exactly matches one of the numbers on the card, the player whose taler is in that igloo take his taler, putting it in his play area. The players return all igloos to the igloo village.

Again, the youngest player counts to 3 to start the new round.

The game ends in two ways:

Now the players determine who won: each player counts the Eskimos on the cards they gathered. To this number, each adds the number of talers they have (both theirs and their opponents'). The player with the most points is the winner! 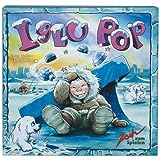