How Do You Doodle Game Rules Each player gets their own set of 9 colored Guessing Tokens, one Doodle Sheet from the pad, and one pencil.

Players can also take a Scoring Reference Card as a helpful reminder on how to score.

Choose one player to "host" the game. The "host" will select the Topic Card each round, will manage the 30 second sand-timer, and voting and scoring will always begin with this player for the entire game.

The game is played in 9 rounds.

Helpful hint: players should do their best to keep their doodles inside the appropriate box on the Doodle Sheet. Yes, we know the area for each doodle is small - but it's the biggest pad we could fit inside the box!

The "host" randomly selects a Topic Card, reads the 3 similar words aloud, and places the card where everyone can read it.

Next, each player (including the "host") randomly selects one of the Number Tokens from the center pile. Players should glance at the number on their token, but keep the number a secret by placing it face-down (hashtag side up) on the table in front of them. This number is important - it indicates which word on the Opic Card each player will be doodling.

The "host" flips the sand-timer, and then every player now doodles their word, doing their best to make sure other players can guess which word they are doodling. Players cannot include any letters or numbers in their doodles. Yes, this does make the game more challenging!

Players should doodle as fast as they can - because 30 seconds really isn't all that much time! When the sand- timer runs out, all players must stop doodling immediately.

Now all players must use their Guessing Tokens to indicate which word they think the other players have doodled.

Players do this by placing a Guessing Token that matches the word they think another player doodled (by placing it face-down next to that player's black Number Token). Repeat this for every player.

Players may only place one Guessing Token per doodle. Of course, players cannot place a Guessing Token on their own doodle (because that would be dumb).

Neither helpful hints nor bluffing are allowed during this stage. People who feel the need to let everyone else know just how clever they are may find it challenging not to table talk.

But just stop it - there is plenty of time after each round for players to brag about how clever their doodles were, or how they figured out someone else's doodle.

Players may also choose not to guess on a doodle. Why not guess? As you will see in the section on scoring, players lose a point for each incorrect guess.

When all players have finished placing their Guessing Tokens, scoring can begin.

Scoring can be tricky, so be careful. Players keep track of their own scores, so it is important to be honest.

Token) and then flipping over the Guessing Tokens to reveal what other players guessed.

Players are awarded points as follows:

Points for the Guesser


Points for the Doodler

The game ends when all 9 rounds have been played. Each player sums their TOTAL points for each round. The player with the highest score is the winner!

Players can refer to their handy Scoring Reference Card to remind them how to score points. Each player should write down their points earned (or lost) for each doodle in the shaded column on the Doodle Sheet.

When the entire round has been scored, each player must total up their column and write the points earned for that round in the TOTAL box.

And yes, you can earn negative points in a round. It happens!

Score the entire round, moving clockwise around the table. When the round is finished, return the black Number Tokens to the center pile.

Helpful hint: also wait until the entire round is finished before redistributing the Guessing Tokens back to each player. 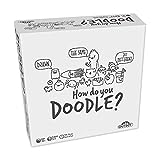 How Do You Doodle? 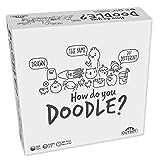 How Do You Doodle