The Monsters of Horrified

The following contains information specific to each Monster, including how to complete their task, how to defeat them, and their Power, which may be activated when they attack.

Before you begin playing, read the section for each Monster in your game, as well as the information below, which applies to all games.

The Monsters are agitated by your efforts to defeat them, and there is always one Monster who is frenzied. At the start of the game, place the Frenzy marker on the Monster mat with the lowest Frenzy Order.

When the Frenzy symbol appears on a Monster card, the Frenzied Monster moves and attacks. This could result in the same Monster moving and attacking twice in one turn.

Note: There is one Frenzied Monster at all times during the game. The Frenzied Monster will move and attack more frequently, because they strike each time the Frenzy symbol or their own symbol appears on a Monster card.

Defeated by a Hero

When a Monster is defeated, they are no longer considered to be in your game.

Ignore all Events and Monster Strikes for all defeated Monsters for the rest of the game.

Remove the Monster's figure and location overlay (if they have one) from the board. If the defeated Monster had the Frenzy Marker, place it on the next Monster according to the rules above.

If there are any Items on the Monster mat (the Wolf Man or the Invisible Man), place those Items in the Item discard pile. Then return all of the Monster's components to the box, including their mat, figure, and tokens. If a Hero has one of the Monster's tokens (Soul sign or Hunted emblem), it is also returned to the box.

There are three water spaces on the board: the Lagoon, the River, and the Waterfront. Only the Creature can move to or be placed at these spaces.

When the Creature strikes, consider water spaces and water paths when determining who is closest to him and the shortest path toward his target.

The Heroes must embark on an expedition aboard the Rita to explore the Lagoon and find the Creature's hidden lair. While at the Camp, a Hero may take the Advance action to search the Lagoon.

of that color. By carefully choosing which color to use, you can move the Boat further into the lagoon and complete the task more quickly.

The Creature's Lair is represented by the final blue X at the center of the mat-to complete the task, the last Item used must be blue.

Note: The Boat could move off the Lair-see the Creature's Power below.


Defeat: Drive Him Away

If the Boat is at the Lair, you can defeat the Creature by driving it away. A Hero must be in the same space as the Creature and take the Defeat action.

Discard one red, one blue, and one yellow Item. The strengths of the Items do not matter. You've defeated the Creature!

If the Power symbol is rolled when the Creature attacks, the Creature rocks the boat. Move the Boat backward, one

for each Power symbol rolled. If the Boat is at the Start, the Power has no effect.

If the Power moves the Boat off of the Lair, you cannot defeat the Creature. A Hero must take the Advance action again to move the Boat back to the Lair before the Creature can be defeated.

The Heroes must find and smash Dracula's four Coffins, which are situated around the village. While in a space with a Coffin, a Hero may take the Advance action to smash it.

Discard any number of red Items with a total strength of 6 or more. Then take the Coffin, flip it to show it's been smashed, and place it on Dracula's mat in the corresponding spot.

Note: Coffins are not Items and cannot be picked up.

If all four Coffins are on Dracula's mat, you can defeat Dracula by overcoming him. A Hero must be in the same space as Dracula and take the Defeat action.

Discard any number of yellow Items with a total strength of 6 or more. You've defeated Dracula!

Note: Dracula charms the current player's Hero, which may not be the same Hero that Dracula just attacked.

Example: A Hero at the Camp takes the Advance action and discards a blue Item.

They move the Boat to the next blue

in the lagoon path on the Creature's mat.

If a Hero takes one more Advance action and uses a blue Item, the Boat will reach the Lair and any Hero will be able to defeat the Creature.

Frankenstein is actually the name of the scientist who created these Monsters. However, with so many Monsters plaguing their village, the villagers have come to refer to these particular Monsters as just "Frankenstein" and the "Bride".

Frankenstein and the Bride are two of the most frightening Monsters, and if you choose to play against one, you must face them both. To defeat them, you must teach them what it means to be human so they can live happily together.

However, if they meet before you complete this task, they will send each other into a fit of rage.

If Frankenstein and the Bride are ever in the same space before their task is completed, increase the Terror Level by one, place Frankenstein at the Graveyard and place the Bride at the Dungeon. This may happen multiple times in one game.

Frankenstein and the Bride have their own Monster symbols, and are treated as separate Monsters for Monster Strikes.

To teach Frankenstein to be more human, a Hero in the same space as Frankenstein may take the Advance action. Discard one yellow Item and increase Frankenstein's humanity score by the strength of the discarded Item, turning his dial clockwise.

Then, you may move Frankenstein in any direction that same number of spaces. In this way, you can prevent him from meeting the Bride too soon, or bring them together once both their scores are at their maximum.

To teach the Bride to be more human, a Hero in the same space as the Bride may take the Advance action. Discard one blue Item and increase the Bride's humanity score by the strength of the Item, turning her dial clockwise.

You may also move her in any direction, up to the number of spaces equal to the discarded Item's strength.

As soon as a Monster's humanity score reaches its maximum (11 for Frankenstein and 8 for the Bride), flip over that Monster's dial so it's showing their face. An exact number is not required-you may exceed the maximum. Once both dials are flipped over, Frankenstein and the Bride will be defeated when they meet.

Note: You may still take the Advance action to move Frankenstein or the Bride, even if their dial has been flipped.


Defeated when they meet

Once you have taught Frankenstein and the Bride what it means to be human and they meet, they will live peacefully together and cease terrorizing the village.

As soon as Frankenstein and the Bride are in the same space and both of their dials are showing their faces, they are defeated. This does not require taking a Defeat action.

The Heroes must supply evidence to prove to the police that the Invisible Man exists. While at the Precinct, a Hero may take the Advance action to supply evidence.

Use one Item of any color, as long as the location on the Item matches an empty spot on the Invisible Man's mat. Place the Item on the matching spot.

Discard any number of red Items with a total strength of 9 or more. You've defeated the Invisible Man!

Note: The Invisible Man does not immediately attack the Villager, but could strike again this turn.

The Mummy believes that one of the Heroes is the reincarnated soul of his true love, and will lure that Hero to him.

The first time a Mummy Event is resolved, the current player takes the Soul sign and that player's Hero moves toward the Mummy. That player keeps the Soul sign for the rest of the game.

The Heroes must break the Mummy's curse by aligning the six Scarabs on the tablet. While at the Museum, a Hero may take the Advance action to move the Scarabs. Discard one yellow Item and then make as many moves as the strength of the discarded Item.

A single move is sliding a Scarab along a groove to an adjacent spot or flipping a Scarab face up (see the Mummy's Power below). You are not required to make the full number of moves.

If all six Scarabs are face up and in the spot matching their number on the Mummy's mat, you can defeat the Mummy by returning him to his tomb. A Hero must be in the same space as the Mummy and take the Defeat action.

Discard any number of red Items with a total strength of 9 or more. You've defeated the Mummy!

Always flip over the Scarab with the lowest number showing, whether it is in its proper spot or not. If all of the Scarabs are face down, the Power has no effect.

A Scarab that is face down cannot be moved. Also, the Mummy cannot be defeated if any Scarab is face down. When you take the Advance action, you may use one of your moves to flip a Scarab face up.

Hunted by the Wolf

The Wolf Man has a vision of which Hero will be his next victim, and is compelled to hunt that Hero down.

The Heroes must discover the cure for lycanthropy by testing ingredients and formulating the antidote. While at the Laboratory, a Hero may take the Advance action to test an ingredient.

Use one blue Item, as long as the Item's strength matches an empty spot on the Wolf Man's mat. Place the Item on the matching spot.

s soon as all six spots are filled, the current player takes the Cure from the mat. The Cure may be given to another Hero using the Share action.

Note: The Cure cannot be discarded to ignore a hit from a Monster attack.

If a Hero has the Cure, that Hero can defeat the Wolf Man by administering it to him. The Hero must be in the same space as the Wolf Man and take the Defeat action.

Discard the Cure and any number of red Items with a total strength of 6 or more. You've defeated the Wolf Man!

Heroes may discard Items to ignore the Hits, as normal. Villagers in the Wolf Man's space are immediately defeated. 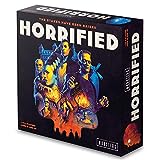