Hop! Jump! Hop! Jump! Frogs jump from leaf to leaf. They try as fast as possible to move to the home leaves of their opponents. After each frog jump the bridge which connects the two leaves disappears.

This makes jumps for other frogs harder. The player who moves all his frogs onto the home leaves of the other players wins.

Players try to move their frogs from their own home leaf to the home leaves of the other players.

If there are four players, then players try to get one of their frogs to the home of each opponent.

Arrange the board elements as shown below.


Place bridges so that all adjacent leaves are connected.

The youngest player begins, and then play proceeds clockwise.

During their turn, a player can do one of the following 2 actions:

A frog can jump from one leaf to another if there is a bridge connecting them. After the jump, the bridge is removed.

Exception: The bridges which connect players' homes to their dosest leaf are not removed.

Legal jump: there is a bridge connecting the leaves.

After the jump, we remove the bridge.

Illegal jump: there is no bridge connecting the leaves.

If a frog jumps onto a leaf which already has another frog (belonging to any player), then that frog must also jump to another adjacent leaf connected by a bridge.

After each jump, remove the bridge that connected the leaves. If on that following leaf there is also a frog, then it must be moved to yet another leaf. The first jump can trigger a chain of jumps.

The player whose turn it is decides where each relocated frog will move. If it is not possible to relocate some frog in the chain because of a lack of bridges, then the original jump is illegal.

A series of jumps is shown below.

The player makes a jump with the red frog from his home to the adjacent leaf.

After this jump, there are two red frogs on the leaf.

The frog that was already there must jump away to an adjacent leaf.

The red frog jumps left to the leaf with a blue frog. I've removed the bridge it used. The blue frog must jump to one of three leaves:

After a jump up, tri ere would be two frogs, but no way for the green frog to jump off that leaf.

Such a move is illegal.

The player decides to jump down with the blue frog, onto the leaf with the pink frog.

After the jump, the bridge is removed.

The last move of this chain of jumps:

The player moves the pink frog to the right.

If a frog enters an opponent's home leaf, then it stays there. It can not move out, nor does it push away other frogs that were already there.

Instead of jumping, a player can put a bridge between two adjacent leaves that are not currently connected by a bridge. There can be only 1 bridge between 2 leaves.

Each of the players has 4 special action cards. They can be used at any moment in the owner's turn, at most one card per turn.

Each card can be used only once during the game. After using a card, the card's owner puts it aside or turns it over to show it has been used.

At the beginning of the game each player has 4 cards. Each set is marked in the corner with a crown in a colored circle.

The circles have the same color as the player's frogs.

The player can make a frog jump twice. Both jumps must be made by the same frog.

The first jump must be to an empty leaf, but the second jump can be to an occupied leaf, where pushing would occur as usual.

Instead of a normal jump (with a bridge), the player can move frog to an adjacent leaf which is not connected by a bridge. The leaf may be occupied, causing pushing as usual.

Instead of placing just one bridge as an action, the player can place two bridges anywhere on the board (connecting 2 different pairs of adjacent unconnected leaves).

After his regular action (moving a frog or placing a bridge), the player can also remove a bridge from anywhere on the board

The first player to get all 3 of their frogs onto their opponents' horn leaves wins.

The following pictures show the final winning positions in games with 2, 3, and 4 players.

The pink player has moved the three pink frogs to the opponent's home and wins. The blue player is behind by one move.

The blue player has moved the three blue frogs to each of the three opponents' homes. 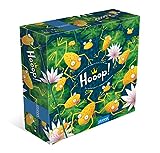