Honshu is a trick-taking, map building card game set in feudal Japan. Players are lords and ladies of Noble houses seeking new lands and opportunities for fame and fortune.

One game of Honshu lasts 12 rounds, and each round is divided into two phases.

Manipulating your position in the player order is crucial for mastering Honshu.

Place the resources in the center of the playing area in a common pool 1.

Deal one random Player Order card 3 and one Scoring Summary card 4 face up to each player.

Shuffle e all the Map cards and deal 6 to each player face down as their starting hand 5. The rest of the Map cards form a draw pile 6. You are now ready to play the game.

The game is played over 12 rounds. Each round consists of a Trick-Taking Phase and a Map Phase.

After all players have played one Map card and a possible resource, a new player order is determined. The Player Order cards are given to players in descending order of the total values of the played Map cards (see the example below).

In the new player order, every player takes one of the Map cards on the playing area and moves to the Map Phase. The used resources are returned to the common pool.

Exception: Lake squares must always be visible and cannot be hidden.

The player with the Player Order card #1 starts the Trick-Taking Phase of a new round by playing a Map card from their hand.

In the beginning of each Trick-Taking Phase, two Map cards are revealed from the draw pile. These cards form a pair. Then both players simultaneously reveal a Map card they want to play from their hand. These two cards form a second pair.

The player who played the higher valued Map card wins and decides which pair he wants. However, before the winner can take the cards, the loser may choose to remove any two resources from their own map and take either of the pairs instead. The pair that was not chosen goes to the other player. Then each player discards one card from the pair and begins the Map Phase with the card left in their hand.

In the final scoring, each visible forest square is worth

In the final scoring, each town square is worth a

, but only the biggest town district of each player is counted.

During the Map Phase, each new production square receives a matching resource on its space. Resources can be used in the Trick-Taking Phase to increase the card value by 60, or delivered to matching factories during the final scoring.

In the final scoring, each unused resource can be scored by moving it to a matching factory
for

. Only one resource per factory.

, while each consecutive square in the district is worth

Fallows have no eff ect on the gameplay. They are only used as a tie-breaker in the final scoring.

At the beginning of the game, reveal one End of Game Scoring card. Each player will score the points indicated on the card as described below:

1: You may deliver two resources instead of one to each factory.

2: Each row or column of three consecutive forest squares gives bonus of

3: Each 2x2 block of fallows is worth

4: Each lake square is worth

instead of the normal scoring.

5: Each town square adjacent to exactly 4 other town squares is worth

6: Each visible and empty production square is worth

7: Each blue and/or yellow resource in a factory is worth extra

8: Each grey and/or brown resource in a factory is worth extra

Players score their maps based on their visible factories, forests, lakes, and towns.

For each forest square the players score

For each town square the players score a

, but only the biggest town district of each player is counted. A district consists of all orthogonally adjacent squares of the same area type.

The first lake square of each lake district is worth 0

and each consecutive square is worth

The player who has the most

In case of a tie, the player with the highest number of visible fallows wins the game. 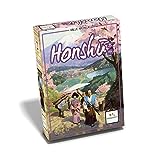