After establishing themselves in Honshu, the lords and ladies head north to Hokkaidō. Beholding Hokkaidō's mountainous landscape, they see that expansion on this land will prove to be a greater challenge than before.

Hokkaido is a game of Hokkaido consists of 12 rounds, each divided into two separate phases. Each player must expand their personal map to maximize their scoring possibilities.

3. Shuffle the Map cards and deal 6 cards face down to each player as their starting hand 5. Do not show these to the other players. Place the remaining Map cards in the center of the playing area, forming a draw pile 6.

You are now ready to play the game.

The game is played over 12 rounds. Each round consists of a Drafting Phase and a Map Phase.

Players should not look at the cards just passed to them. Once all cards have been passed, players move to the Map Phase.

Both players now discard 1 card from this new hand and pass the rest of the hand face down to the other player. After the cards have been passed, players move to the Map Phase.

If you are familiar with Honshu, you may choose to replace the Drafting Phase in Hokkaido with the Card Selection Phase from Honshu. Similarly, when playing Honshu, you could also try Drafting for a change.

In the Map Phase, players expand their maps by placing the card they drafted from the previous Drafting Phase.

In the Map Phase, all players play simultaneously. However, if a player does not want to place their card until another player places first, they must say before anyone places.

Then, the player who drafted the card with the lowest value places their card first, and all other players play sequentially in low-to-high order.

If the newly-placed Map card has any production squares, a single matching resource from the common pool is placed on each of them.

If a player places a card on top of a production square that still has a resource, that resource is discarded to the common pool.

Each player must have a single Mountain Range on their map.

When players choose a new Map card containing Mountain squares, the Map card must be placed so that it continues the single Mountain Range.

All Mountain squares must always remain visible and cannot be hidden under other cards.

Note: During final scoring, the Mountain Range divides the map into two separate sides. This is important for Town scoring.

Once each Map Phase, each player has the option to terraform exactly 1 Desert square on their own map. This may be done before or after the drafted card has been placed onto the map.

To do so, a player must discard 2 resources of the same color from any of their production squares to place a Terraforming tile on a Desert:

For the remainder of the game, the Terraforming tile counts as the corresponding square for all placement and scoring purposes.

If a Town or Forest Terraforming tile gets covered up during a future Map Phase, return the tile to the common pool.

After all players have completed the Map Phase, the players pick up the cards that were passed to them, and a new round begins.

After the sixth round, deal 6 Map cards from the draw pile to each player as their new hand. After 12 rounds, the game ends and final scoring takes place.

During the Map Phase, each new production square receives a resource of the same color from the common pool. These resources can be used for Terraforming during Map Phases or moved to matching Factories during final scoring.

During final scoring, each unused resource still left on production squares can be scored by moving it to a matching Factory. Each resource moved this way is worth

Exception: exactly one of the B Starting Province cards has Factories of a lower value:

). Each Factory can receive at most one resource.

During final scoring, each visible Forest square is worth

Deserts can be terraformed during Map Phases, but otherwise have no effect during the game.

In case of a tie in final scoring, the player with the most non-terraformed Deserts visible on their map wins.

In the Map Phase, Lake squares must always remain visible and cannot be covered by other Map cards.

During final scoring, each orthogonally-contiguous area of Lake squares is scored. In every such area, the first Lake square is worth 0

, and each consecutive Lake square is worth

During final scoring, each Mountain square is worth

During final scoring, the Mountain Range divides the Map into two sides. On both sides, count the size of your largest orthogonally-contiguous Town area. Each Town square in the smaller of these two Town areas is worth

Note: During final scoring, both ends of the Mountain Range are considered to continue indefinitely in a straight line.

Any Town squares located on this imaginary line (see the image on the right) are excluded from the scoring.

This effect applies to Town squares only.

4. Shuffle the Goal cards. Randomly draw two more Goal cards than the number of players and place them face up on the table. Return the unused Goal cards to the box.

At the end of each round, all available Goal cards are checked in ascending numerical order:

Once a player has received a Goal card, they cannot receive any more Goal cards or Terraforming tiles this round.

If all Goal cards have already been fulfilled during previous rounds, this phase is skipped. During final scoring, each fulfilled Goal card is worth

Players score their maps based on their visible Mountains, Forests, Factories, Lakes, and Towns.

The first Lake square of each lake area is worth 0 @f1.jpgand each consecutive square is worth

On both sides of the Mountain Range, count the size of your largest Town area. Each Town square in the smaller of these two areas is worth

Note: For Town scoring, both ends of the Mountain Range are considered to continue indefinitely in a straight line. Any Town squares located on this imaginary line are excluded from the scoring.

In case of a tie, the player with the highest number of visible Deserts wins the game. 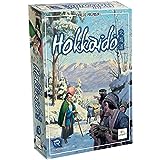