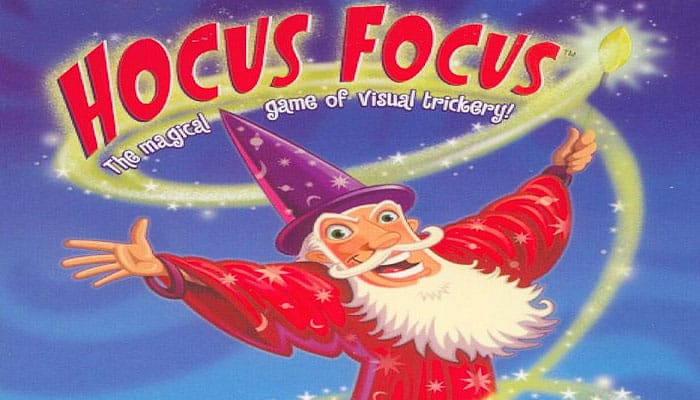 Be the first player to collect 10 cards by identifying wizards that have nothing in common with the card in the center.

Before playing, take some time to look over the cards. Notice that the wizards come in three different sizes (skinny, medium and wide) and that their hats, wands, robes and shoes are four different colors (red, purple, green and turquoise).

No two wizards are exactly alike throughout the entire deck!

Shuffle the deck and deal 12 cards, randomly scattered face up in the middle of the playing area. Stack the rest of the deck face down in the center of the 12 face up cards to form the draw pile.

This is the draw pile. Select one player to go first, such as the person whose birthday is coming up next.

The first player turns over the top card of the draw pile and places it face up on top of the pile. Then, without taking turns, all players race to find a wizard from the playing area that is completely different from the wizard on the draw pile card.

In other words, he must be a different size and all attributes - hat, robe, shoes and wand, must be different colors.

When you find a card that fits the requirements, shout, "Kazaam!" and then point it out to the other players. If everyone agrees that the card is completely different, remove it from the playing area and place it in a face down pile in front of you.

Then move the face up card from the top of the draw pile into the playing area and start the next round by turning over the top card on the draw pile.

Example: Let's say the skinny wizard on the right is turned over on top of the deck. Wizard A does not fit because even though all clothing parts are different, he is the same size.

Wizard B does not fit either because he has the same color hat. However, Wizard C fits because every attribute is different.

The winner of this round receives the card from the previous round as a bonus.

If none of the cards in the playing area fit the requirements, the first player to shout, "No Match!" collects the card on top of the draw pile. Start the next round as usual.

The first player to collect 10 cards wins. For a longer or shorter game, decide on a different winning number before starting.

If you shout, "Kazaam!" and then point out the wrong card or take too long to point out a card, you must forfeit one of the cards you won out of the game.

Remove it from your stack and place it in a pile off to the side.