The object of the game is to collect the most cards by building snakes of all sizes.


How to build a snake

Every snake mid-section is a different color at each end. Each head and tail card is one color. To build a snake, match a color on one card to a color on another card.

The cards don't have to line up squarely but the colors must match. A whole snake includes one head, at least one mid-section (but the more, the merrier) and one tail.

Shuffle the snake cards. Place the stack face down on the playing surface and fan the cards out. Draw any one of the fanned cards and place it face up in the middle of the playing area. This is the starter card.

The youngest player starts first. She picks one card from anywhere in the card fan and turns it face up. Do any of the card's colors match the starter card?

If so, place it next to the starter card with the matching colors touching. See the snake start to take shape? If the card doesn't match, lay it face up in the playing area to start a new snake.

Play continues clockwise, with each player drawing one card from anywhere in the fan and either matching it to a "snake-under-construction" or starting a new card if there is no color match.

The next player picks a purple head. Because none of the cards in play are purple, he places the card face-up in a new location and starts a new snake.

The rainbow-colored head and tail cards are wild. They can be placed next to any color mid-section for a match.

If you can place a head or tail card to complete a snake, you win that snake. Say "Hisss!" and slide it in front of you. The snakes you win form your snake pit. (Remember: a whole snake has one head, at least one mid-section, and one tail).


Combining two snakes into one

If you draw a mid-section card and one of its colors matches one snake-under-construction and its other color matches a different snake- under-construction, you can use that card to combine them into one gigantic snake!

You can only join two snakes-under-construction with a newly drawn card.

Keep playing until all the cards in the fan have been drawn. Leave any unfinished snakes in the middle. Now, count the cards in your snake pit. The player with the most cards wins.

In case of a tie, the player with the longest snake wins. 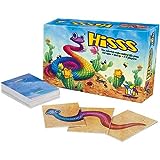