Welcome to the world of Hilarium, the game of pandemonium in motion! Basically, everybody has cards in their hands. The cards have "actions" written on them.

Everyone acts out the "actions" on their cards...AT THE SAME TIME! Your goal is to find the players who are acting out the same "actions" you are and match!

Place the Game Board in the center of the playing area. This is where the pile of "draw" cards will be placed during the game. It is also where the "ante" will be placed.

Pick a player to be the Banker. This is not brain surgery...but pick someone who can count and is relatively honest [politicians need not apply). Give each player 100 Bucks, in any denomination.

Pick a player to be the Dealer; he will, yes...Deal the Cards!

The Dealer selects one deck and deals out five cards face down to each player. Players should have five cards in their hands. The remaining cards are then placed face down in the Draw area of the Game Board.

They are now known as the "Draw Pile". Immediately after dealing, the Dealer announces which color of the split-faced deck will be in play. Players should all be playing the same color so they can match!

There are six different decks of cards. The face of each deck is split-faced into two colors. Make sure that everyone is looking at the same color on their cards. If they are looking at tHe wrong color, they may just have a teensy bit of a problem matching anyone!

Each player must have five cards in their hand. The goal of the game is to match them, then get rid of them. Every time you successfully accomplish that goal, you will draw a replacement card from the "Draw Pile" until there are no replacement cards left.

To get rid of a card in your hand, find the person who has the exact same card in his/her hand. This is done by acting out the "action" on your card.

When you do find the player who is acting out the same "action" as you, quickly get his or her attention, and act out the action on your card. If you are convinced you've got matching cards, show your cards to each other to confirm.

Then, each player places that card down in front of him, and immediately draws a replacement card from the Draw Pile. If you don't match this time, you don't get to place your card down. Keep going!

It is possible for you to have two matching cards in your own hand. When that happens, just put both cards down in front of you, and replace them by drawing two new cards from the Draw Pile. The technical game term for this is "lucky".


Act Out, Match Up

There is no particular order for making matches. Don't concentrate on acting out only one "action". The matching card for it may still be deep in the Draw Pile. So, if you don't find a match quickly, start acting out another card from your hand.

It's possible, although unlikely, that a game could begin with no one having a card that matches another players. After several minutes of trying, each player should exchange two cards for two new ones. Start again.

Players cannot say aloud any word that is on the card [unless it is in quotes].

Players cannot say aloud even a variation of the words on the cards. (Ex: You can't say I'm a fish if the card action is You're a goldfish.]

Act. Sing. Dance. Pantomime. Wiggle. Speak whole sentences. Just do not say what is on the cards unless it is in quotes, and remember, there are a number of ways to perform most actions.

For example, the card may read: You're a newborn baby, so think of the ways you could act this out:

So, while one player may be acting out a card one way, someone else may play it completely differently. Point is: no matter how you find your match, you score!

Ah, Hiiarium's poison pill. The GOTCHA card. This card has no match. And it will cost you! If it is in your hand at the end of the round, you lose 30 Bucks. While you are holding it, you have one less match-able card to play. Sooooo, this is the card you will want to get rid of [duh]!

There is only one way to get the GOTCHA card out of your hand: stick another player with it! When you have a match with another player, simply pass this card to them and say "Gotcha!"

Pass it to them before they draw a replacement card from the Draw Pile! The GOTCHA card will now be one of the five cards in that player's hand. They don't get to "replace" the action card that was just matched and they're stuck with the ol' GOTCHA card.

Be careful, the GOTCHA card is going to move around the table a lot!

You may get it back. Just don't get stuck with it! Got it?

You gotta Pay to Play

At the start of each round, BEFORE THE CARDS ARE DEALT, every player must place a @10 Buck "ante" onto the game board "Ante" spot.

After all of the players have been given their cards, the round is officially started when the Dealer takes the top card on the Draw Pile and flips it face-up onto the "Ante" pile.

Start acting out! Whichever player finds the matching card in his hand during the game may reach over, smack down that card onto the "ante" card and take the whole pot. No, they do not get to score for those two cards but they do get the cash!

The cards just stay face-up on the (now empty) pot. Sometimes, in the heat of battle, a player may be holding the matching card for the "Ante" card and forget they have it. If that happens, and the round ends without anyone having picked up the pot, the pot "rolls over" for the next round.

Someone was NOT PAYING ATTENTION! It's OK, it happens to lots of people. Everyone simply antes up the 10 Bucks for the next round and adds to the pot. It is utterly unlikely, but if you start a game and the card you flip over onto the ante is the GOTCHA card, stop everything...re-shuffle and re-deal.

This is REALLY unlikely...but we wanted to make you feel secure so we covered this too.

When the Draw Pile is gone, the round is nearly over. As soon as one player has successfully matched all of his cards, he should yell "Stop!" Then, the round is over.

Everyone must stop playing. No more matches are allowed. You may have to pipe up loudly as other players will be frantically trying to pass off the GOTCHA card and make their last matches.

Some player may really enjoy acting like a ballerina. So, you've really got to be firm. "STOP!!!!!!!" That's more like it.

You may not count your cash beyond any amount you have to pay to the Bank. Only the Banker is allowed to count the winnings in order to hand out the cash.

If a player spots another player counting their cash, they simply yell out "NO COUNTING!"

If that player is caught counting their cash a second time, the person who catches them gets to take @10 Bucks from the offending player's stash. NO COUNTING CASH...not even when a round ends! This is just "one of those rules"; don't argue, just do it!

At the end of the round, when al! of the cash has been awarded, the Dealer gathers the cards and reshuffles the deck. The next round is played, using the same deck of cards, but the other color of the split-face is used.

For example, if you played the blue side in round 1, use the green side for round 2.

Everyone re-"antes" @10 Bucks. The cards are dealt. The "ante" card is flipped face-up on the Ante pile to start the round. And everyone acts out again.

At the end of four rounds (that would be two rounds with the blue side, and two with the green], you may now count your cash; the player with the most Bucks wins! Now wasn't that simple? 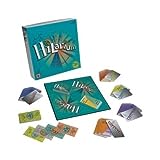