You are the cultural elite, the quintessential bon vivants , the true icons of the age. The competition is fierce amidst highborn and nouveau riche to assert your status and earn prestige in the eyes of your peers.

Adorn yourself with splendid jewellery and high fashion , enjoy fine cuisine and fizzing champagne , and waste away money in casinos and at the races.

Show off your exquisite palette and excellent tastes, but don't be caught penniless or be cast out as an impostor!

Fashion is fickle but style is forever. Show them what it really means to be a member of High Society.

Give each player a set of eleven money cards of the same color to keep secret in their hand. Shuffle the status cards and place them as a face-down deck in the middle of the table.

The player who shuffled the deck starts the game.

Players are socialites trying to live as lavishly and frivolously as possible, outbidding each other to prove they are living life to the fullest.

At the end of the game, the poorest player (or players) will be cast out of the group.

The remaining player who has managed to become the most fashionable, by collecting the highest value status cards, will earn the envy of all and win the game.

At the start of each round, flip the top card of the status deck face-up - this card will now go to the highest bidder. The starting player must either bid or pass.

To bid, you must play one or more money cards face-up in front of you and announce the total of all your face-up money cards.

If you don't want to bid, you may pass instead. If you have already bid this round, return all of your face-up money cards to your hand. You may no longer bid this round.

Place the contested status card face-up in front of the winner. Discard all of the money cards on the table face-down. The winner of the auction becomes the starting player for the new round, and reveals the next status card from the deck.

If the revealed status card is a disgrace card, the auction works slightly differently. This time you are bidding to avoid taking the card, and the round will end as soon as any one player passes.

That player picks up their money cards as usual, but must take the disgrace card and place it in front of them. All other players must discard their money cards on the table face- down. The passing player starts the next round.

If a player takes the Faux Pas card, they must immediately discard one of the luxury cards in front of them (their choice).

Note that only cards with a value between 1 and 10 are luxury cards. Discarded status cards are returned to the box.

The Passe card reduces a player's status by 5.

The Scandale card halves the player's status at the end of the game.

Four cards in the status deck have a dark green background - the three prestige cards, and the Scandale card. As soon as the fourth one is revealed, the game ends immediately, with no bidding for the revealed card.

Each luxury card awards status equal to its value. Each prestige card doubles the owning player's status, while the disgrace cards decrease the status. The player with the highest status that hasn't been cast out wins.

Rahul has the following status cards in front of him:

Rahul then gets to double his status twice because of his prestige cards, for a total of 28! Finally, the Scandale card halves his status, leaving Rahul with a total of 14. 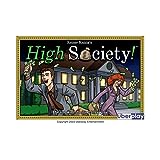