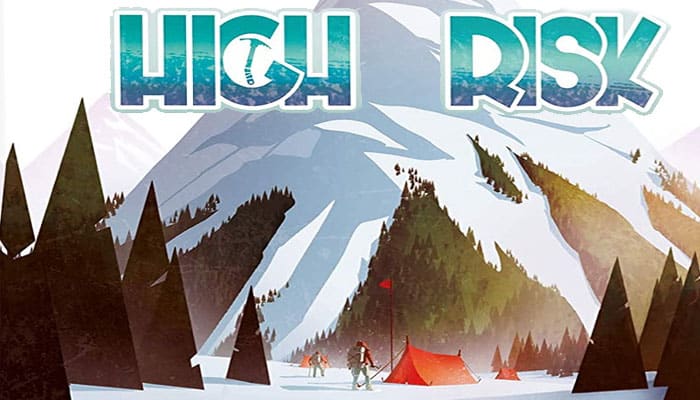 Climb if you will, but remember that courage and strength are nought without prudence and that a momentary negligence may destroy the happiness of a lifetime.

Do nothing in haste; look well to each step, and from the beginning think what may be the end.

in High Risk, take the lead in an expedition during the golden age of mountain climbing. On your turn, roll the 6 dice in search of the Ascension symbols you'll need to advance one of your climbers.

A Weather symbol isn't of much use to you, but is much less dangerous than a Danger symbol. If you get nothing but Danger symbols your lead climber will fall, getting further away from the summit.

Will you be satisfied to advance safely but maybe too slowly? Or will you try to move as fast as possible at the risk of falling far down the mountain? Bring all of your climbers to the summit and victory will be yours.

The Mountain board represents the mountain that you're trying to climb. The board is divided into several zones:

The Climber tokens represent your expedition. They are roped together and can keep their teammates from falling all the way down the Mountain. Their goal is to reach the Summit before the other teams.

The dice are all identical and have 3 different symbols:

Your highest-up Climber token is at risk of falling.

One of your Climber tokens of your choice can advance.

Each player chooses a color and takes as many of that color's Climber tokens as indicated by the table below. Place them in the Basecamp. The unused tokens are returned to the box.

Pick a first player at random and give them the 6 dice.

A game is played over an unlimited of turns, until all of one player's Climber tokens reach the Summit.

Once all of your Climber tokens reach the Summit, move on to END OF THE GAME.

If all of your Climber tokens are at the Summit, the game is over and you win.