Score points by winning discard piles, while also trying to be the first player out of cards.

Note: If you are starting a round, form a new discard pile by playing any card from your hand next to the draw pile.

You must play a card if possible, but if not then flip the Hi-Lo chip. If the chip lands on the opposite side, play a card from your hand and end your turn.

If it lands on the same side as before, draw the top card of the draw pile and play it if possible. If you're still unable to play a card, you'll instead make a "reset" play.

To make a reset play, first, the player who most recently played a card collects all the cards in the discard pile. (Keep collected cards in a face-down pile in front of you). Then, play any card from your hand to start a new discard pile.

Play proceeds clockwise, with the next player following the same rules as above.

Cards ending in "1": Playing one of these cards causes the next player to draw 1 card and immediately skip their turn.

Cards ending in "2": When you play a card ending in 2, you must immediately play a second card, unless it was your final card.

Cards ending in "0": These cards are each worth 10 points when scoring (see: "Ending the Round").

The round ends when one player has discarded all the cards in their hand. That player wins all of the cards in the current discard pile and receives a bonus of 10 points for going out.

All players count the cards they collected and score 10 points for each card ending in "0", and 1 point each for all other cards.

Each player announces their total for the scorekeeper to tally.

To start a new round collect all the cards, shuffle them thoroughly, and deal each player a new hand of 7 cards. The Hi-Lo chip remains on the same side from the previous round, and the player in last place starts the next round.

If there is a tie for last place, either the oldest or youngest tied player starts, based on which side of the Hi-Lo chip is face-up.

The game ends once any player has accumulated at least 75 points at the end of a round. Whoever has the highest score is the winner. 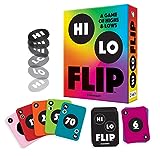