You and your team have been contacted by the boss, challenging you to pull off the heist of the century: crack a safe filled with gold in 5 minutes or less and collect $50 million in cold hard cash!

Work together as a team and follow the instructions carefully to open the safe and walk away ridiculously rich. Do you and your team have what it takes to complete the job?

If this is the first time playing, install the batteries as indicated in the section "Battery Installation".

Remove the lid from the top of the safe to insert the 12 gold bars into the 12 slots. Replace the lid when finished (see FIG. 1).

Note: Do NOT touch or put pressure on the safe lid during gameplay. This will result in the safe being unable to release gold bars at the end of a successful game.

Place the safe in the middle of the table.

Each player chooses which role he/she wants to play (Hacker, Money Man, Explosives Expert or Lookout) and sits on the correct side of the safe so that he/she can easily reach his/her button.

The Money Man handles all of the money during the game, and should place the money near himself/herself in 3 separate piles: $1M, $3M, $5M.

Place the 8 tools around the safe, so that all players can easily reach them.

As soon as the level has been selected and announced, the game will begin. The boss will give different commands to the players:

If a player does not press his/her button in time, or the wrong player presses his/her button, this counts as a mistake. The boss will announce when the team only has one mistake left.

Heist is a cooperative game, so either the whole team wins, or the whole team loses. During the game, the safe will begin to open as the game progresses. The boss will also announce when a team is halfway there.

If a team works perfectly together, the safe will open all the way and release the gold. The boss will announce whether a team made all the right moves to collect $50 million.

To play again, players should carefully push down the top of the safe, remove the lid and reinsert the gold bars.

Afterwards, one player should press any button to start a new game.

When a team successfully completes level 5 without mistakes, a hidden (extremely difficult) 6th level becomes available. In this level, players have to react even faster to all commands and a new command is introduced:

CHANGE ROLES command: upon this command, all players get up and move clockwise to take the role of the player to the left of them.

The bonus level will stay available as long as players do not turn off the game with the switch on the bottom or replace the batteries.

The game will go into sleep mode when no buttons are pressed for 5 seconds. Players can re-activate the game by pressing any button on the safe. 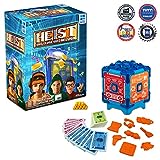 Heist: One Team, One Mission