Not only do the farmers compete with one another vigorously, they must pay close attention to the well being of their pigs, so as not to lose any pigs to illness.

Of course, from time to time there are events rewarding farmers who outperform their peers, including pig shows, field trips to pigsties, and pigs in heat! In addition to the joy of raising pigs, excellence in doing so is the key to winning this game!

Step 1: After one player turns over the top Season card from the stack (see explanation below), each player decides what Action he/she would like to take in response, and places the corresponding Action card face down in front of him/her, without showing other players.

At the completion of card selection, all players turn over their Action cards simultaneously.

Note: Starting with the spring cards, all Season cards belonging to the same season must be turned over before moving on to the next season.

Step 2: Evenly distribute the quantity specified on the Season card among players who have chosen the same Action.

Step 3: All players take turns executing his/her chosen Action, starting from the Starting Player and move in a clockwise direction (for details on each Action, see Function Specification: Actions).

Unexecuted Actions cannot be saved or accumulated; instead every unexecuted Action can be exchanged for a $1 Game Coin. The execution of Actions and/or the exchange for Game Coins/Bills are carried out one player at a time, until all players have had their turns.

Step 4: The event specified on the Season card takes place. If this is already the last card in a given season, then the rules for Season Change apply as well. (For more details, see Function Specification: Season Cards - Season Change).

Feed allows one of your Pigs to grow up one size.

Large Pigs cannot grow any larger in size. Any given Pig can only grow once in any given round. The chosen Pig for the Feed action is returned to the Piggy Store in exchange for a Pig of the next size up.

Mate allows one of your Medium Pigs or Large Pigs to give birth to one Baby Pig. Any given Pig can only give birth once in any given round. Baby Pigs are taken from the Piggy Store and placed in a Sty of the player who chose to take this Action.

Purchase allows you to make a one-time purchase of one item from the Piggy Store.

Sties are where Pigs are kept. There are a maximum of 66 living spaces to house Pigs in a Sty. Players should not place Pigs over the borders of a Sty, nor should they place one Pig on top of another, as illustrated.

Subsequently purchased Sties can be added to existing ones by connecting the sides (as illustrated), and Pigs can be housed in the livings spaces newly created at the junction of two Sties. The prices of additional Sties are: $10 for the second one, $15 for the third, $20 for the fourth and so forth. Sties cannot be resold.

Pigs of the same category are purchased and sold at the same price:

are priced at $3 each, and grow up to be Small Pigs.

are priced at $6 each, and grow up to be Medium Pigs.

are priced at $10 each, can mate and grow up to be Large Pigs.

are priced at $15 each, can mate but cannot grow any larger.

Turn a Pig card with the syringe icon face-up immediately after the Pig has received a vaccination. The vaccination stays in effect as a Pig grows up, and does not affect the purchase or sale of a Pig in any manner.

Vaccines can be applied to any Pig, but no more than one Vaccine per Pig. Any Pig that is housed in a Sty but has not received a Vaccine before a Season Change dies immediately after a Season Change.

Dead Pigs are returned to the Piggy Store at once, without any compensation.

Nutritional Supplements can only be added to the diet of Baby Pigs or Small Pigs.

Birth Amulets are used at the births of Baby Pigs; one Birth Amulet allows a newborn Pig to be born a Small Pig (rather than a Baby Pig).

(Feed, Mate, Purchase, and Sell) are specified on each Season card along with their respective frequencies/ quantities to be distributed immediately; distributions are made accordingly after all players have turned over their Action cards simultaneously.

Distance from the starting player

Tools are sold in the Piggy Store or awarded to winners of the events specified on Season cards. All Tools are priced at $1 each, and cannot be resold. Tools must be returned to the Piggy Stores once they have been used.

Events are specified on Season cards. When an Event concerns the price of an item, both the purchase and the sale price are affected accordingly.

When two or more players are tied in first place with the most of the specified subject required by a given competition, each of those players shall receive the same specified prizes.

Dead Pigs are returned to the Piggy Store at once. To prevent such losses, players in possession of unused vaccines can vaccinate their Pigs before the inspection takes place.

The game ends when all Season cards have been turned over and played.

First, all players should sell off any Pigs remaining in their Sties for Game Coins/Bills, and add up the values of their respective Game Coins/BilIs. The player with the largest sum wins the game.

If more than one player shares the largest sum, then those players should sell off any Tools and Sties they own for Game Coins/Bills.

The sell-off prices are: $1 for each Tool, $5 for the first Sty, and a $5 price increase is added to each subsequent Sty (i.e. the same as their purchase prices described under Function Specification: Piggy Store - Sties). Again add up the values of the Game Coins/Bills at this point.

The player with the largest sum wins the game.

The game is a tie if more than one player still shares the largest sum after everything has been sold off as described above.

It is up to the players to decide collectively whether to use the advanced level game instructions for their game.

The instructions for playing the advanced level game are the same as those for the regular level, except that Step 1 under"How to Play" becomes:

Step 1 After one player turns over the top Season card from the stack, the Starting Player decides what Action he/she would like to take for the round, and shows the corresponding Action card to the other players. Then the next player in a clockwise direction does the same.

This step is repeated until all players have shown their Action cards before starting the distribution as explained in Step 2. 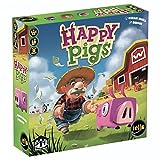