Hay the most card pairs by slapping your Slam-O-Matic hand.

The player to the left of the dealer takes the first turn. Play then continues to the left.

Start your turn by drawing the top card from the drawpile and adding it to your hand. Then look at the cards in your hand to see if you have any matching card pairs to play.

Any two cards that show the same number make a match. For example, two 3s make a match, or two 10s make a match. Only two matching cards make a pair--never three of a kind, or four of a kind (that's two pairs!).

The Joker: The Joker does not match any other card-it stays in play until the end of the game, and counts as a bonus.

If you have a matching pair of cards in your hand, slap your colored hand to play the pair.This is called a Hands Down. Add some fun, if you wish, by calling out: "HANDS DOWN!" as you slap.

As soon as you slap your colored hand, all other players must immediately slap their own colored hands as fast as they can! Note: Players with no cards in their hands cannot participate in a Hands Down.

The player who slaps last loses the Hands Down. Find out who lost by looking at the paddles in the center of the Slam-O-Matic. The loser's color paddle will be on top.

Note: If the colored paddles clump together so that you can't tell which one is on top, the Hands Down doesn't count. It's still your turn, however--so if you want to play that pair, just slap your colored hand again!

After the Hands Down, place your pair faceup in front of you. Then take one card at random from the loser's hand, and add it to your own hand. If you have another pair to play, slap your hand for another Hands Down!

Play as many pairs as you can on your turn. The more pairs you play, the better your chance to win!

Always say "PASS" to end your turn. You must PASS if you only have one card in your hand, or have no pairs and do not wish to fake a Hands Down.


Faking a Hands Down

At any time during your turn, you may fake a Hands Each player counts his or her pairs. Each pair counts Down, whether you have a matching pair to play or as one point; the Joker counts as two points.


When the drawpile runs out

Eventually, the drawpile will run out of cards. When this happens, start each turn by taking one card at random from any other player's hand.


Starting your turn without cards in your hand

When all of the card pairs have been played, the player holding the Joker places it faceup beside his or her card pairs, and the game ends.

Each player cowls his or her pairs. Each pair counts as one point; the Joker counts its as two points.

The player with the most points wins the game!

In case of a tie, players count up the numerical value of each of their pairs. (For example, one pair of 5s counts as 5 points). The Joker counts as 20 points. The player with the highest total wins! 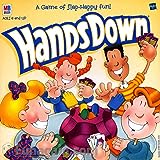