You're a Goosebumps monster who has escaped from your manuscript to roam the streets of Madison.

The only threat to your continued monster mayhem is the magical typewriter of R.L.Stine.

So it's a race across town to make sure you capture the typewriter and can never again be trapped between the pages of a book!

The first part of every turn is picking up enough cards to make a hand of five cards.

For your first turn this will be one card, but on subsequent turns you may have to pick up more. Always pick up a card (or cards) to start your turn.

Players follow the trail of manuscript pages. There are THREE ways to advance:


After you have played a card (or cards) from your hand and have moved accordingly, your turn is over and play shifts to the player on your left.

Be sure to pay attention because there are 2 Monster Mayhem cards that you can play during other players' turns.

When it is your turn and the draw pile is out of cards, another player must gather the discarded cards and shuffle them to make a new draw pile.

The Landmarks on the path are: RL Stine's House, Madison Police Station, the Graveyard, the Highschool, and the Amusement Park.

When you are on a Landmark, you are safe from the effects of Monster Mayhem cards - except Found Your Book!

Landmarks are the only spaces that 2 or more players can occupy at the same time. NOTE: The End is NOT a Landmark and 3 of a Kind and Monster Mayhem cards cannot be used to reach it.


Shortcut through the Graveyard

If you land exactly on the Graveyard Shortcut sign on the path then you may proceed to the top tombstone.

If you land on a STEAL space, pick a player (and without looking) steal one of their cards. Play it immediately and move accordingly.

This might help you take another turn or it might not help at all! (The player who had a card stolen will pick up an extra card at the beginning of their next turn).

STEAL spaces are also in effect if you are moved onto

them by another player, in which case it becomes your turn to steal. Play then continues to the left of the last player to steal.

(When you are moved by another player onto the STEAL space - stealing a card becomes your turn, you do not get a regular turn).

There are two ways to move backwards:

Play these cards during your turn:


Play these cards during other players' turns:

Play to block any attempt to move you using a Monster Mayhem card.

The player who played 3 of a Kind immediately loses their turn and does not move to the next Landmark.

Play moves to the player that used the Freeze Ray card.

The first player to reach THE END space wins. You win by playing a card with the exact or greater number, needed to land on THE END space. Note: You CANNOT use a Monster Mayhem card or 3 of Kind to win the game!

When playing with 5-6 players you might want to start on R.L. Stine's House for a shorter game. 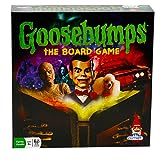 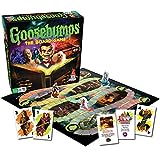