To pick gooeys out of Louie's nose without making him sneeze his brains out.

Open Gooey Louie's nose door and attach the looped gooey into the groove in the trigger.

Place the rest of the gooeys inside the nose area.

Place his brain inside his head with the brain side up, and hold the brain down as you close his head.

Push Louie's eyes in and close the nose door to begin playing.

The youngest player starts the game by rolling the die to see how many gooeys to pick from Louie's nose.

Pick one gooey and then game play switches directions

Caution: Please instruct children to keep their faces at least 12 inches away from Louie's head to avoid being struck by the jumping brain.

For those who believe that there absolutely, positively MUST be a winner, we oFfer the following "other" way to play...

The youngest player starts the game by rolling the die to see how many gooeys to pick from Louie's nose. Play continues counter-clockwise.

As soon as a player picks the wrong gooey, Louie will sneeze and his brains and eyes will pop out!!

The player who caused Louie to sneeze his brains out is now out of the game.

The remaining players reset the game for another round by following the set up instructions, including putting back all of the gooeys that were picked in the previous game.

Keep playing rounds until there is just one player left.

The last player remaining after all other players have been knocked out of the game is THE WINNER. 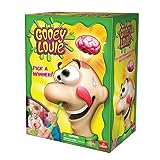