Queen Benevolence is hosting a celebration to honor her loyal subjects. To thank them, she will give away 12 extraordinary items from her treasure box that she keeps hidden away in a secret chamber in the castle.

But when the Queen goes to choose the items that she wants to bestow, she discovers the box is empty! A thief has stolen her treasures and is running away with them!

The celebration cannot happen without the treasures and there is not much time before daybreak and the start of the party. The treasures must be found!

Near the castle live a band of friendly gnomes who are loyal to the Queen.

She calls on two of her most trusted gnome friends to find the treasures and return them. The thief was last seen running through the winding maze of the castle, dropping the objects along the way.

The gnomes need your help to quickly guide them through the maze and find all of the treasures so they can bring them to the Queen in time for the festivities. Hurry before time runs out!

Players cooperate to help the gnomes reach as many treasures as possible before the sand timer runs out.

Empty the box of all playing pieces, leaving the base inside the box.

Attach the two posts where indicated on both sides of the box bottom. Decide together which maze game board you want to play with and place it in the posts so the board is upright in the box.

The game boards are marked with levels of difficulty: A through D. A is the easiest level, B is a little harder, C is harder still, and D is the most difficult.

Start with level A and work your way up to D.

Players sit on opposite sides of the board while playing. Rules are for a 2-player game.


Team Cards for a Multiplayer Game

4-player game: Two players sit on either side of the board. Give each team one of the team cards.

Each player on that team chooses one color for the entire game. This color indicates when it is that player's turn based on the team colors shown on the treasure card.

Remember, everyone plays cooperatively and wins or loses together.

The game is played in 3 rounds. Each round has 4 steps:

To start the next round, shuffle the treasure cards and the corner start cards and place them in a pile face down. Use the same game board again or switch it out for a different board.


Move in the Mazes

Front of maze board A: Player may move gnome along the path but cannot move the mover through a wall.

Back of maze board A: Player moves red gnome in the path on this side.

Front of maze board A: Red gnome pulls blue gnome with him through a wall on this side.

To get a feel for how the movers move, place each magnetic mover on the #1A corner on opposite sides of the A game board. They should attach to each other. Each player is responsible for her own mover.

Take turns moving the attached movers around the board. When you move one, the other will move along with it. Move only the one on your side and don't peek at the opposite side of the board!

Let go of your mover while the other one is being moved. If you both try to move at the same time, they may become detached, which will require you to place the movers back on a corner during play.

Can you find them all before time runs out?

Each game is played in 3 rounds. Add up the points from all 3 rounds to determine your final score.

This is a game of communication and speed. Challenge yourself next time to beat your best score! 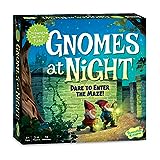