Place the 5 items in a circle in the middle of the table. Shuffle the cards well and form a face-down card pile.

The player who was the last to take a bath turns over the top card in such a way that all players can see it at the same time.

Now, using one hand, you try - as fast as lightning - to grab the desired item that is depicted on the card in the original color, e.g., the blue brush or the red towel.

And if there is no item depicted in its original color? In this case, you grab the item that is not depicted and whose color is not shown on the card.

Example: This card shows a gray GHOSTESS and a red BRUSH. But there is no gray ghostess and no red brush. Therefore, you have to grab the (green) frog, because neither the FROG nor the color GREEN can be seen on the card.

If you grab the right item, you lay down the turned-over card in front of you as a reward. Grabbed items are put back in the middle of the table. Then one of the players turns over the next card (visible to all at the same time), etc.


Examples for playing with all additional rules:

Example: Whoever is the first to shout out "brush" gets the card (towel + frog).

Example: Whoever is the first to shout out "Handtuch" gets the card (towel in original color + frog).

Each player has only one attempt. If a player ...

The player who has grabbed or shouted out the right item gets this card (or these cards) in addition.

If all players are wrong, nobody gets cards. The cards given up, along with the turned-over card, form a "jackpot" on the table. The next card is revealed. Whoever is the first to grab or shout out the right item now gets the turned-over card plus the cards from the jackpot.

The game ends when the card pile has been used up. The player with the most cards wins.

Play 2.0 together with the Original game

For a game of normal duration, take approximately half of the card piles from Geistesblitz and Geistesblitz 2.0 and mix them together well. Then form a face-down card pile.

Reveal one card and place it in the middle between the two circles of items. Basically, all rules of the two games apply.

There is a new rule in the combined game:


Jumping into the other room

If the card shows an item in its original color, you do not look for this item but for the same color item in the other room.

If the mouse is shouted out in German, you have to shout out "Ratte" (instead of "Maus") so that the difference between the words in the two languages is clear. 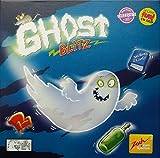 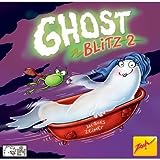