Gerald McBoing Boing is going on an adventure with his friends Janine, Jacob and Burp and you get to come along! Get up and act out animals and things using sounds all along the way. Get to the end of the path and it's time to "Boing Boing!"

Be the first to get to the end of the path and yell, "Boing Boing!"

The rules explain the core of the game-the very "bare bones" first. For a little twist, fun rules are added at the end of this sheet.

You can introduce these twists as your child gets older, learns more or becomes ready for variation.

The youngest player goes first. Begin by spinning the spinner.

Advance to the first space of the color indicated on the spinner.

If you spin the "Springing Arrow" you become the "Line Leader" and jump to the space in front of the mover that is the farthest ahead! Boing Boing!

The first to get to the Finish space wins! Don't forget to "Boing! Boing!"


Little twist when advancing along the path:

You must make sound effects whenever advancing your mover.

If you forget and another player catches you, the player who caught you gets to advance one bonus space.

You must be caught immediately after you land on your final space. You are safe if the next player spins before you are found out. Phew!


Little twist on the act up! spaces:

Try Charades...The player who picks the card (actor) must secretly look at the card, then act it out using sound effects. All other players guess. Whoever guesses correctly gets to advance one bonus space.

If no one guesses in a reasonable amount of time, you still get credit for trying! The actor gets to advance one bonus space while everyone else stays put.

When a player guesses correctly-you can DING-DING like Gerald does to signal that he or she Is correct! Throw in an extra AUDIENCE APPLAUSE by clapping if you like!

When a player guesses the wrong answer-you can do a BUZZ like Gerald does to signal he or she is wrong.


Little twist on the boing spaces:

It's a race! The first player who jumps up and yells, "Boing Boing!" gets to advance one bonus space.

If you get to advance a bonus space and you find yourself on a special space, just stay put. Once you advance, your turn is over. Wait for your next turn to spin again and continue play. 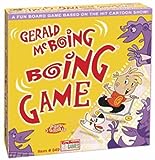